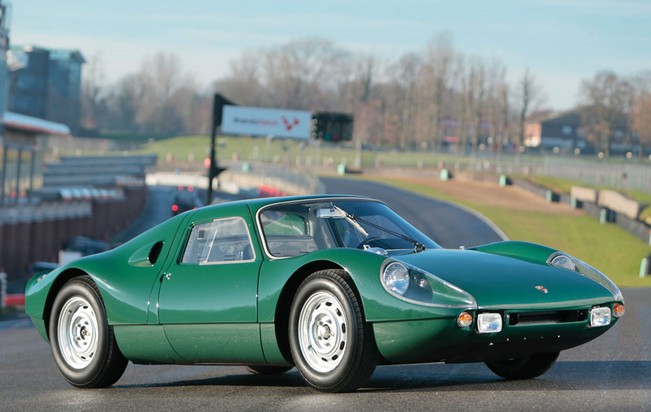 The Porsche RS 61 race car was the final version of the 718 series and it went out of production in 1961. It remained competitive for another year or so, but by the end of 1963, Porsche had to have something else representing it on racetracks. Enter the Carrera GTS.

Designed to compete in the FIA GT class, the Carrera GTS (they couldn’t officially call it the 904 for legal reasons – thanks, Peugeot) was new for the 1964 model year (and made through 1965). The car would win its class at Sebring and Le Mans that year alone. This car was the first 904 delivered new to the U.K. and likely the only one painted in this color. It raced in privateer hands in races held all over the U.K. In 1968 it was sold to an owner in the U.S. and the current owner acquired it in 1997.

It has been restored and uses Porsche’s 185 horsepower 2.0-liter flat-four. The body is fiberglass and it is a quick car, topping out at 160 mph. This is the last Porsche race car that I’m pretty sure you can get away with driving on the road. That makes it more or less an early supercar and the last one like it Porsche built for quite some time.