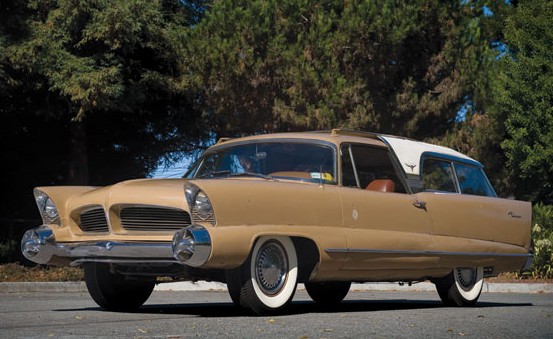 Chrysler had a pretty good relationship with Ghia in the 1950s. The famed Italian design house built some pretty good-lookin’ rides for this one of Detroit’s Big Three during the decade. You might not call this car “good-lookin'” but it definitely screams “1950s.”

The design is by Virgil Exner and it certainly is of the era. I’m not sure about the name, however, and am pretty confident no one would buy a car called the “Plainsman” (although that would be a very apt name for the Camry). The original engine is gone, but since the 1960s it’s used a 440 (7.2-liter) V-8 making 375 horsepower.

This is said to be the only known station wagon concept car from the 1950s still in existence. It has an international history: being sold to a high-ranking Cuban official in the 1950s before the revolution. He had to smuggle the car out of the country when Castro took over and he had to flee. After that, it went to Australia where it was converted to right-hand drive and used regularly. Once back in the U.S., it was re-converted to left-hand drive and used even more. This car is highly original and it sold in 2010 for $90,000. You can see more here and check out more from this sale here.

One thought on “Chrysler Plainsman Concept”