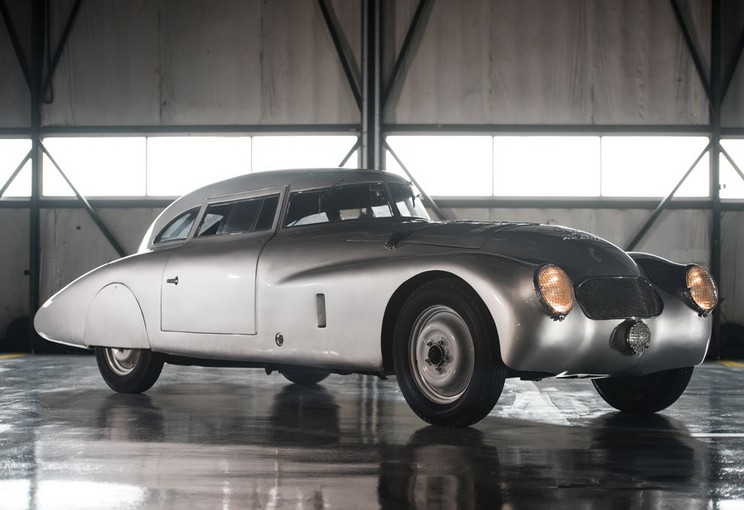 There is so much to like about this car. The first thing that caught me eye was the car’s looks. With the silver, streamlined body and the dim headlights (not to mention that it’s photographed in an aircraft hangar) it looks like some top secret Nazi experiment.

But it isn’t. It is fascinating. This was the ultimate Adler Trumpf, which was a small family car built by Adler between 1932 and 1938. Trumpfs were powered by a 56 horsepower 1.9-liter straight-four. Most had upright grilles and traditional body work for the period. They were not fast.

Enter Paul Jaray, an aerodynamicist schooled in zeppelin design. He figured he could make a Trumpf faster by slimming it down. At least six Rennlimousines (“racing limousine”) were built and three of them were entered in the 1938 24 Hours of Le Mans, including this one. It finished 9th (2nd in class) with Otto Löhr and Paul von Guilleaume. It was then wrecked at Spa, repaired, and used as a show car.

Somehow it survived the war and reappeared in Bavaria in 1955. It ended up in the U.S. shortly thereafter. It passed around before being purchased by the current owner from the Blackhawk Collection in 1994. It’s beautiful. The interior is fantastic if not sparse and roomy. It’s unlike anything else you’re likely to come across and it comes from a weird time time and place in history when things were inventive and little mysterious. I’m over the moon with this car.

Only three of these still exist, all slightly different. This is the best one. And it shouldn’t be cheap. Click here for more info and here for more from this sale.