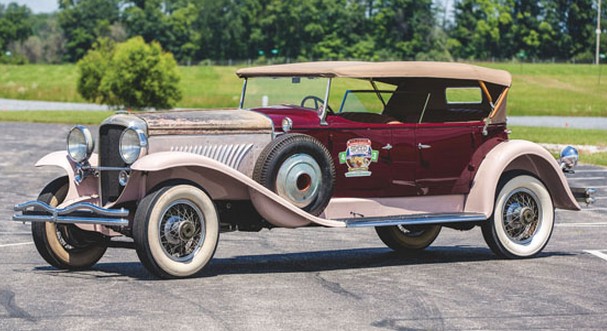 There was a time when Duesenbergs were just used cars. Some people knew the value of them, but from about the outbreak of WWII through the early 1970s, these were just big, old cars. Only in the past 40 years have they really become known as the pinnacle of automotive achievement.

Fortunately, there were people who knew this all along and hoarded the things in fields and barns, protecting them. Some of the bodies were lost along the way, but many of the engines survived. This car has a genuine Model J 6.9-liter straight-eight making 265 horsepower. The engine number, 394, is listed as “renumbered.” But it is a true engine.

The chassis has been “remanufactured” (and we don’t know if that means it’s one of the replica chassis or just built from scratch). The current owner has owned this car for many years and, as you can tell, it has been his project car. He basically took one of those engines that survived and decided to get it back on the road. Heroic.

The body is actually a Tourster replica that was built much more recently and is not an authentic Derham Tourster, a car very desirable and expensive. This car might look a little awkward but it’s still a work in progress with original parts mixed in with those that have been remanufactured (the interior is gorgeous by the way). This is a great way to get a Duesenberg without paying “full” price. It should bring between $275,000-$350,000. Click here for more info and here for more from this sale.