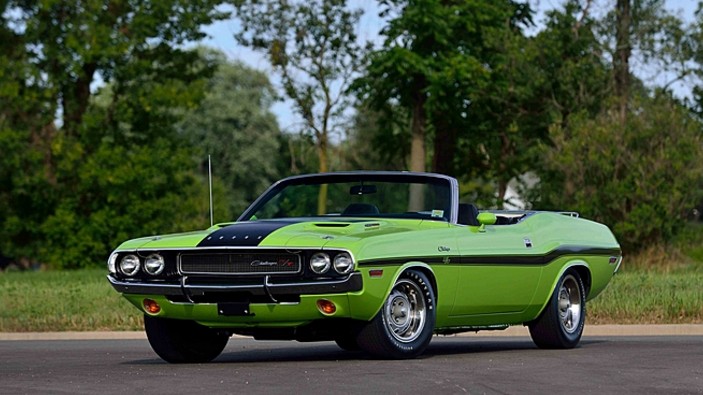 Rare Hemi week continues with this, Dodge’s bad-boy muscle car from 1970. The original Challenger model was produced between the 1970 and 1974 model years only. The 1970 model is the most collectible, followed by the ’71s.

What 1970 had and the other years didn’t was a Convertible. The R/T performance package was also available (it included beefy brakes, etc.). Only 1,070 R/T Convertibles were sold in 1970. Guess what, the Hemi makes it even rarer. Long the Holy Grail of muscle cars, the 1970 Hemi ‘Cuda Convertible had 14 built. Only nine Hemi Challenger Convertibles were ever made. Of those nine, this is one of four cars equipped with an automatic transmission.

The 425 horsepower, 7.0-liter “426 Hemi” V-8 is a numbers matching example on this low-mileage, restored car. In fact, it has covered less than 1,500 miles since the restoration was completed. It’s must-have muscle if you’re in that game. Click here for more info and here for more from Mecum.

One thought on “Hemi Challenger Convertible”