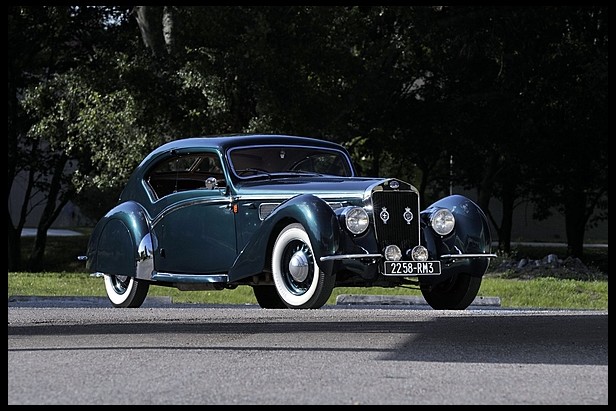 I’ve spoken before of the “French D’s” – highly-desirable pre-war French automobile marques that are all right next to each other alphabetically – but this is the first Delage we’ve featured. Delage was founded in 1905 by Louis Delage and it was acquired by rival Delahaye in 1935.

The D8-120 was the first Delage automobile designed and produced under Delahaye ownership. It was the only eight-cylinder car offered by either make. The engine is a 4.7-liter straight-eight making 115 horsepower. It was mounted on a Delahaye chassis and sent off to a French coachbuilder – in this case, LeTourneur & Marchand.

This body design ranks among the finest French designs of the 1930s and the most coveted among Delages. Only 12 were built (this is car #11) and only eight remain today. It has full ownership history – including wartime – and was in the same hands from 1957 until 2013. The most recent restoration was carried out in 1999. This is a million-dollar car. Click here for more info and photos and here for more from Mecum in Monterey.

One thought on “Delage Aerosport”