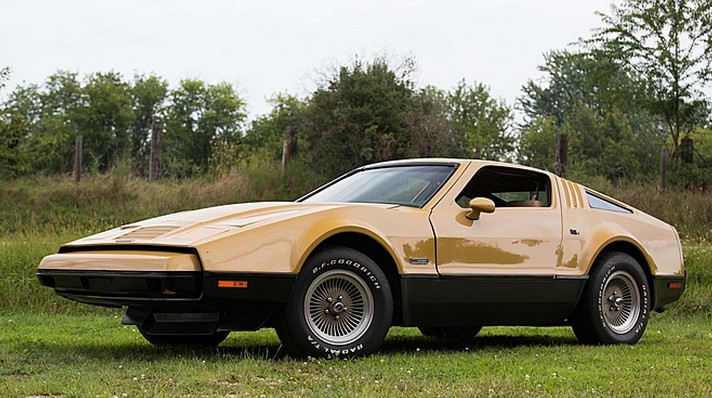 This Canadian masterpiece was the product of automotive entrepreneur Malcom Bricklin. Bricklin was responsible for five different marques appearing in the U.S., including the car you see above as well as Yugo, Bertone, Pininfarina, and most successfully, Subaru.

Bricklin wanted to build a safe sports car, so he went to New Brunswick, Canada, and set up shop. Production started in 1974 and this was the very first car – Bricklin’s own personal Bricklin. It is powered by a 5.9-liter V-8 from AMC. Later cars for Ford V-8s. The body is fiberglass and the colors were all “safety” colors (including this one in “suntan”). It has gullwing doors that are actually powered – able to open and close at the push of a button (the only car to ever offer such a convenience).

Production was slow and the company couldn’t get ramped up in time before the receivers were called in in 1975. Only 2,854 SV-1s (“safety vehicle one”) were built before the whole idea was shuttered. A few 1976 models were built by assembling spares in Ohio.

This car is serial #00001 and has 13,000 original miles. These cars aren’t super collectible or expensive but they do have a cult following. If you’re looking for one, this is absolutely the one you need to own. Click here for more info and here for more from Mecum.