The mid-1960s were a time for change at Indianapolis. The mid-engined revolution was in full swing by ’66, and the previous year was the first time that a majority of the field was made up of rear-engined cars. The British cars were back in force in 1966, with Lola leading the way with their Ford-powered T-90.

As most old race cars do after their time on track is finished, this car passed around between a few owners. In this case some of them believed this to be the ’66 500-winning car of Graham Hill. The current owner bought it under that assumption in 1995. After much research, it was discovered it was not. In 2017, the car was restored back to its Bowes Seal Fast Special livery that Stewart ran in 1966.

It’s got a pretty interesting history and the 100% right look of an early rear-engined Indy car. The pre-sale estimate is $1,000,000-$1,400,000. Click here for more info and here for more from this sale. Also… can we take a second to ponder the insanity that Stewart finished SIXTH and was still not running at the end of the ’66 500? The fifth-place finisher wasn’t running either. Talk about attrition…

Cars with flat-six engines mounted out back are supposed to be very sporty, almost race cars. Or so I hear. So why was the Corvair labeled a danger, and why did Chevy never make sit sportier than the base model ever was?

Enter Don Yenko, who would become even more famous for modifying Camaros in the late 1960s. He started by hotting-up Corvairs into “Stinger” form. He wanted to make the Corvair SCCA eligible, but it didn’t really fall into a pre-existing category. So he modified an example to fit. But the SCCA required 100 production examples before that version would be race-eligible. So 100 1966 Yenko Stingers would end up being built. This is #50.

The changes from the base car varied from example to example. This car has a “Stage II” flat-six rated at 190 horsepower. It also has four carburetors, a limited-slip differential, a front spoiler, and a four-speed manual transmission. It’s a cool car and among the coolest of Corvairs. Read more about this one here and see more from Mecum here.

It wasn’t that long ago that we featured a Glas 1300 GT – the coupe version of this car, which was built by Hans Glas GmbH in Dingolfing, Germany, between 1964 and 1967, when BMW took over. Over 5,000 coupes were made (including 1700 GT models), and the convertible is much rarer.

Power is from a 1.3-liter inline-four making 74 horsepower. This car has the rare five-speed gearbox, and the body was designed by Frua. Drop-tops were introduced in 1965, and only 242 examples of the 1300 cabriolet were built.

This car has known history back to new, much of it spent in Germany. The coupe we featured sold for less than $18,000 earlier this year. This car carries an estimate of $71,000-$94,000. No roof? More money. Click here for more info and here for more from this sale.

Here’s one I can’t believe we haven’t covered yet. The Amphicar was designed by Hans Trippel and produced by the Quandt Group in Germany between 1960 and 1965. The model was dubbed the “770” because it would do seven knots on the water and 70 mph on land.

A few different engines were used throughout production. This car is powered by a 1.5-liter Triumph inline-four that was capable of up to 75 horsepower. The same engine drives the car on land or water, and once you splash down, the engine drives a pair of reversible propellers. The car could even drive itself back out of the water.

Amphicars are remarkably usable. They can be found in waterways throughout the world every year (I once saw one on the back of a large private boat in Paris. It’s the ultimate dinghy). And I think their continued use is a wonderful sign of how well made they were. Only 3,878 were produced in total, and it seems like there’s always a few for sale somewhere. This one is selling at no reserve in Indiana. Click here for more info and here for more from this sale.

Giovanni Volpi was a Venetian who operated a racing team called Scuderia Serenissima (La Serenissima was an Italian name used to describe the Most Serene Republic of Venice). Volpi’s team competed in F1 and some sports car stuff. He was closely aligned with Ferrari. Until…

Some ex-Ferrari people, namely Carlo Chiti and Giotto Bizzarrini, bolted from Ferrari and founded a company called ATS, which Volpi helped finance. Ferrari was not pleased and refused to sell Serenissima any 250 GTOs.

So what’s an enterprising Italian to do? In 1963, Volpi founded Automobili Serenissima to build his own cars. Supposedly, eight were built in total and only five survive. Well, Volpi is still alive and apparently is selling three of them at auction in a few weeks, including this car, which is chassis no. 5.

It appears that chassis no. 5 may have started life as a Serenissima – a closed coupe that was later turned into a spyder and shown in road car form. It’s powered by a 3.5-liter V8 and was turned into a racing car shortly after its introduction. It raced at the 1966 24 Hours of Le Mans with drivers Jean-Claude Sauer and Jean de Mortemart. A broken gearbox in the fifth hour led to the car’s retirement from the race.

The car is presented in as-raced condition and is not currently running. It is the only Serenissima car to race at Le Mans (they intended to race the Jungla GT but it did not appear). Even still, it should command between $1,500,000-$2,000,000. Click here for more from Artcurial. 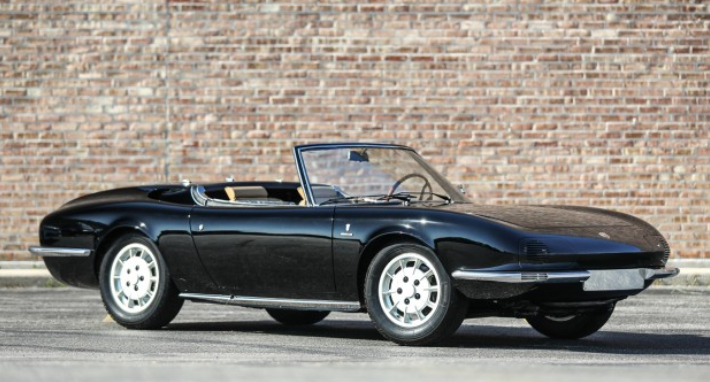