In 1987, some people at Ford thought about homologating the car for touring car racing, which required 500 “evolution” models. So Ford roped in Aston Martin Tickford to help convert the cars to “RS500” spec. Changes included a larger turbocharger for the 2.0-liter inline-four, which now was good for 224 horsepower. The front end was reworked to aid cooling, and a second spoiler was added beneath the rear wing.

This car has less than 36,000 miles, and a pre-sale estimate has not yet been published. You can read more about it here.

Update: Sold, but Silverstone won’t tell us for how much. Lame. Gotta love that transparency.

The March Racing Team was founded in 1969 and appeared on its first F1 grid the following year. They took a few breaks over the years, returning to F1 in 1987 after a four-year absence. For 1988 they had a young new designer on staff. That guy was Adrian Newey, and this was the first Formula One car he designed.

The team was branded as Leyton House March Racing for 1988 (they would race under the Leyton House Racing name in 1990 and 1991 before the March name returned for the team’s final year in ’92). The car features a naturally aspirated 3.5-liter Judd V8. The complete race history for this chassis is not known, but the team’s drivers were Mauricio Gugelmin and Ivan Capelli, the latter of whom is said to have run this car at the Japanese Grand Prix in 1988 where he qualified fourth and DNF’d.

The 881 was kind of a success, scoring a decent number of points and achieving two podiums in 1988. It was also used by the team for the first two races of the ’89 season. No pre-sale estimate is yet available, but you can read more here and see more from this sale here.

Marcos built some interesting, if not a little awkward-looking, sports cars in the 1960s. By 1972, the company was out of business. However, in 1981, Jem Marsh, who had co-founded Marcos initially, brought the company back to life. A stream of more modern cars followed until everything went belly-up again in the late 2000s.

The Mantula was introduced in 1983 and was sold as a coupe or a spyder. Just 119 spyder variants were produced through 1993. Externally, they carried many of the same visual cues as Marcos cars of the ’60s, but everything was just a little sleeker to fit the times. Power is from a 3.5-liter Rover V8 that was much lighter than the previous sixes the company used previously.

Excalibur sort of invented the neo classic. The first Excaliburs were actually produced in 1952 and looked nothing like this. They were sports cars based on a Henry J chassis. The whole endeavor was a series of false starts. The ones we all know first went on sale in the mid-1960s, and they remained in production under a few different corporate umbrellas up until about 1990. They spawned countless look-a-likes, such as Zimmer, Clenet, Tiffany, and more.

Styling was originally reminiscent of the Mercedes-Benz SSK and was penned by Brooks Stevens for Studebaker. Studebaker went out of business, so SS Automobiles was set up in Milwaukee in 1965. That company gave way to Excalibur Automobile Corporation in 1986 after a bankruptcy. It was owned by the Stevens family, and that’s where the Series V came from. It was offered as a sedan and limousine.

This car is powered by a V8, likely from Ford. Excaliburs aren’t something you see everyday, but the sedan versions are especially uncommon. This one is expected to sell for between $25,000-$30,000. Click here for more info and here for more from this sale.

EuroBrun was a short-lived Formula One team that competed between 1988 and 1990. The team was formed by the joining of powers of Giampaolo Pavanello’s Euroracing team (that operated the factory Alfa Romeo F1 team in the early 1980s) and Walter Brun’s Brun Motorsport.

Based in Milan, the team used Cosworth engines in 1988 before switching to a Judd powerplant. This car retains its 3.5-liter Cosworth DFZ V8. It was driven by Stefano Modena during the 1988 season, but the specific history for this chassis is not provided.

Modena finished 11th at the 1988 Hungarian Grand Prix, the team’s biggest highlight. They did not pre-qualify for any races in 1989 and made only two starts in 1990 before it was all over. This orange-and-green F1 car (with an engine!) is now being offered at no reserve. Click here for more info and here for more from this sale.

Offered Online by Bring a Trailer

The Aztec was designed by Giorgetto Giugiaro at Italdesign as a celebration of the company’s 20th anniversary. It was shown as a prototype at the 1988 Turin Motor Show. Then the company decided to actually build road-going examples. They wanted to make 50 of them, but probably only 18 were actually completed.

It’s an almost-mythical car. They never come up for sale (at least publicly) and this is the first one to hit the auction block in more than a decade (though a quick search will show you zero auction results for the model at all). This one was once in the Shanghai Auto Museum, which seems like a place cars don’t escape from. But it was brought stateside by the Blackhawk Collection (who has a magical way to get some other classics out of China).

The Aztec is powered by a turbocharged 2.2-liter Audi inline-five that made 250 horsepower (if the stickers on the car are to be believed). That’s not exactly supercar territory, power-wise. But, those looks. That’s why this qualifies as a supercar. It looks like it drove off of a Star Wars set. It has a dual-canopy cockpit with gullwing and side-hinged doors. It’s straight out of bizarro land.

And it. Is. Amazing. This is a car I’ve wanted to see come to market for a long time (since I started this site almost a decade ago). And it’s the first one to hit the open market. What’s it worth? That’s the fun part. No one knows… there isn’t a big list of past sales to give us a clue. But if it isn’t a big money car, it deserves to be. Chances are you won’t see another one change hands for quite a while (unless the selling price here knocks it out of the park… then we’ll see a few of them).

Think about all of the wild stuff that came out of the 90s supercar madness. This is like the genesis of that. It’s a bummer this wasn’t a bigger success, then maybe they would’ve put the Nazca C2 into production as well. That could’ve led to even more fun in the 90s (Alfa Romeo Scighera anyone?).

The Aztec is among the wildest designs ever put into production, and it is the precursor to all of the low-run, high-end stuff we are awash in today. Check out more about this car here. But hurry, the auction ends Monday.

Venturi cars are so cool! I hope you like them, because there were quite a different number of models in the early days and I plan to feature each one of them as they come up for sale around Europe. These cars went on sale in 1987 and they were originally called the MVS Venturi before being renamed the Venturi Coupe.

The auction catalog lists this one as an MVS Venturi but I can’t find anywhere that lists the year the name switched over. It’s powered by a turbocharged 2.5-liter V-6 making 200 horsepower. The car was luxurious and sporty for its day. 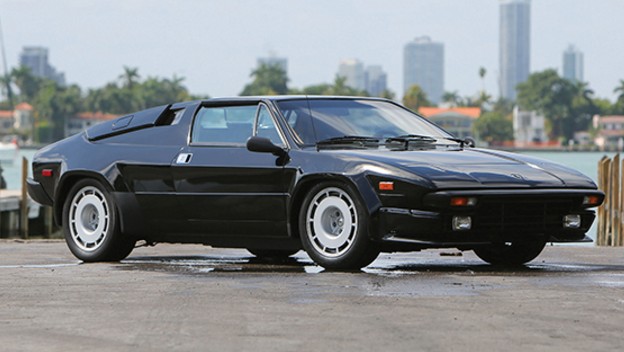