This is a car with quite a few names. I’ll start at the beginning, and you can draw your own conclusions as to what it should be called (I just went with what the dealership selling the car calls it). The Ghia and Chrysler connection of the 1950s is well documented. Chrysler spent a lot of money designing fanciful show cars in the ’50s, with styling done by Ghia (well, styling by Exner, execution by Ghia).

Ghia showed a prototype dubbed “Gilda” in 1955. Then there was Dart concept was styled by Exner in 1956, and a second version called the Diablo also appeared in ’56. Then, in 1957, Ghia showed another evolution, called the Superdart. It was reportedly created for Chrysler, but there doesn’t appear to be any Chrysler badging on this car.

Power is from a 400 horsepower Hemi V8, and the car rides on a Chrysler 300C chassis. It debuted at the 1957 Turin Motor Show and later ended up in the U.S., where it was purchased by Dual Motors, who showed the car as a Dual-Ghia prototype. Most of the internet seems to just call this car a 1958 Dual-Ghia Prototype. Which is what it was last shown as. But it’s not what it was called originally.

A private owner purchased it shortly after Dual-Ghia’s 1958 New York show appearance and actually put nearly 40,000 miles on it over nearly two decades. It’s said to be original and unrestored. Be it a Chrysler, a Ghia, or a Dual-Ghia, it remains as a fantastic piece of ’50s styling excellence. It’s for sale in Connecticut with no price listed. Click here for more info. 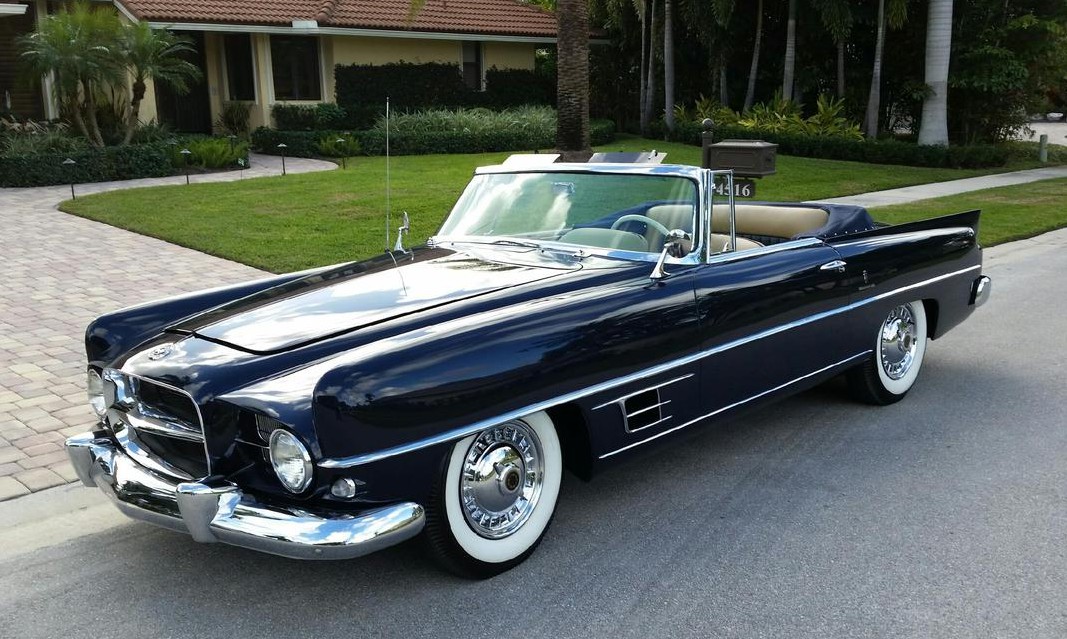 You’re looking at one of the most beautiful American cars of all time (yes, even though the body is all Italian). Dual Motors of Detroit was founded by Eugene Casaroll. He bought the rights to the Ghia-designed 1955 Dodge Firebomb concept car and put it into production. He called it the Dual-Ghia. And it’s great.

Dual Motors shipped a Dodge chassis to Turin where Ghia would add this gorgeous body and then ship it back. Once home in Detroit, the cars were fitted with a 5.2-liter Dodge D-500 V-8 making 230 horsepower. The engine sounds fantastic and is throaty enough that if the sleek European body threw you off, the engine would definitely alert you to its inherit American-ness.

The cars were only built in 1957 and 1958 and they were the expensive favorites of celebrities like Frank Sinatra. Around 100 of these were built (some say 117) and 73 remain. They’re crazy rare but come up for sale at a startling rate for their rarity. But that’s not to say that trend will continue. So if you want one, get your hands on it ASAP. They sell in the $300,000-$400,000 range. Click here for more info and here for more from this sale.

The 2012 Ault Park Concours d’Elegance, held in one of Cincinnati’s most beautiful parks in one of Cincinnati’s most uppity neighborhoods, was held two weekends ago. The show was full of some of the finest cars from around the mid-west. This year’s featured marque was “A Century of American Power.” Classic Car Weekly was in attendance and here are some of our favorites.

Our pick for best in show was this 1929 Stutz Model M Lancefield Supercharged Coupe.  It came out of the Mitchell Collection in Texas and is the only surviving example of the five originally built. The low roof-line and gives this car a truly sporting presence.

One of the other awesome rides was this 1910 Oldsmobile Autocrat Prototype Race Car built for the 1910 Vanderbilt Cup. Old race cars like this are fascinating – they’re as big as trucks and the driver and riding mechanic were just hanging on, completely exposed to the elements in tiny little seats with absolutely no protection whatsoever. Also, don’t forget about the 7.7-liter four-cylinder hanging out front.

Oh, and check out these exhaust, which look like something of a battle tank:

I really enjoyed this 1911 Lozier Briafcliff, as it was gigantic. A gentlemen hanging around it all day tried to convince me that it was worth $40 million. I nodded and smiled but politely declined to tell him he was insane.

One of the most mind-blowing aspects of this show, was that, on either side of the Stutz mentioned above, there was an SJ Duesenberg. Not a bad day when there are multiple SJ Duesenbergs vying for your attention. This one is a 1929 Bohman & Schwartz Disappearing Top Roadster. 320 horsepower and 140 mph in 1929 must have been incredible.

Another exotic was this 1969 Lamborghini Miura S, one of 338 built. Only when standing next to one of these do you realize how impossibly low they sit to the ground. What a wonderful machine.

MG was a featured marque this year. Two cars that really stood out included this brilliant blue 1934 NA Evans-Wilkinson Special, one of three built.

There other super-cool MG was this crazy 1985 Metro 6R4 Group B Rally Car from the Lane Motor Museum in Nashville, Tennessee. It was built by Williams F1 for the rally circuit and, yes, crazy is the correct word.

Some other interesting, newer cars include this 1991 BMW Z1, a car you don’t see often, especially in America.

This track-day special (although it was listed as “street-legal”) 2009 Ariel Atom 3 drew a crowd, as you could look around it and see just about every part on/in/within it.

American classics (and muscle cars) were prevalent, with muscle cars being part of the featured “American Power” motif. Easily the most interesting among them was this 1964 Studebaker Commander Super Lark – the only production steel-bodied R-3 package car with the 5.0-liter supercharged V8, which was built for Studebaker by the Granatelli Brothers. It was the fastest compact car in the U.S. when it was built, turning sub-13 second 1/4 miles in excess of 110 mph.

Other fantastic American (or semi-American) classics include this 1957 Dual-Ghia D-500 Convertible. Dual-Ghias are simply beautiful cars and this one in red was no exception.

And what would any good car show rundown be without a trip through the parking lot, a car show in itself. Some of the more impressive cars I saw included a 2013 Chevrolet Corvette Z06 Convertible. It looked mean, and made me wonder why GM hadn’t built these before.

This Mercedes-Benz 190SL Roadster was pretty classic and it looked fun, as it drove past me with four people packed in and on it, having a good time.

This Lamborghini Diablo SV got the attention of the high-school student within me – and plenty of others.

And finally, from the environmentally responsible crowd, this Fisker Karma gathered a lot of interest from onlookers saying things like “What is that?” and “I’ve never seen one of these.” While this car might look like some kind of extended coupe, it is actually a very long car in person – much bigger than you’d think.