Sterling Edwards’ eponymous car company managed to produce just six-ish cars during its short run. But they were pretty. The America was available as a coupe and convertible. Two coupes were made, three convertibles were completed, and the sixth body was stolen and likely scrapped.

This is car number one. It was constructed using the frame from a Henry J and an Oldsmobile Rocket V8 engine. The body is fiberglass, and other parts were sourced from existing cars of the era, including Studebaker headlight rings and Mercury taillights.

When new, this car was said to cost $4,995. Not cheap in the day – almost two grand more than a Corvette. This example received a mechanical restoration in 2003 and was purchased by the consignor in 2013. It can now be yours, as it’s selling at no reserve. Click here for more info and here for more from this sale. 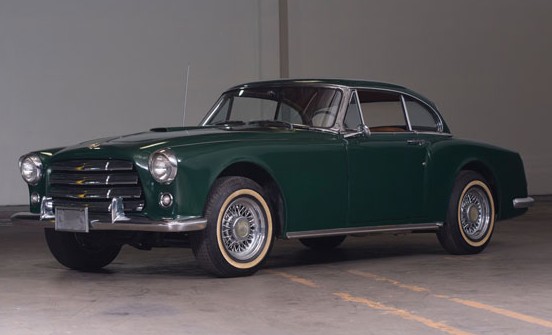 Like many before him and many after, Sterling Edwards made a lot of money in industry but loved cars and wanted to build the perfect one. Well, very few have actually succeeded doing that (Ferruccio Lamborghini is about the only one who comes to mind. Horacio Pagani, I guess, too) and many have lost more money than they’ve made.

Anyway, he built a car called the R-26, which was a race car originally and a road car later. It was not a sales success. His second try was the Edwards America. He took a Mercury chassis and hung a lightweight, attractive, Italian-looking fiberglass body on it and stuffed a V-8 under the hood. This car has a 5.2-liter V-8, making 205 horsepower.

Unfortunately, Edwards’ timing was off and he couldn’t compete with the Corvette or the Thunderbird (much less both). Only six Americas were built and this is believed to be car #2. It has known ownership history and was repaired from a fire many years ago. It shows some signs of age, but it’s super rare and should be worth about $100,000. Click here for more info and here for the rest of Auctions America’s lineup in Burbank, California.