Well here’s a new class of vehicle we haven’t featured before. The Showman’s Road Locomotive. It’s basically a steam traction engine that is made to go down the road, helping transport a circus or carnival. And then once it gets to where it’s going, it’s the powerplant for the show. They are very large and very ornate.

This one was manufactured by John Fowler & Co. of Leeds. The company built four B6 “Super Lion” road locomotives. These were the last such machines built, as steam’s popularity was on the wane. The last road locomotive ceased operation in 1958, and most of them ended up scrapped. This example is the first of the four Super Lions, two others of which also survive.

When new, it was used to power carnival rides until it was retired in 1946. It had two owners between 1950 and 2018, and it was restored over a two-year period in the mid-1990s. Like many other showman’s locomotives, it features a full canopy, a front dynamo, and a lot of brass.

Steam traction engines are impressive beasts in the own right, but once you add this sort of over-the-top glamour to them, they really just become awe-inspiring. This one is expected to sell for between $1,000,000-$1,600,000. Why not? Click here for more info and here for more from this sale.

Founded in 1900 in Cambridge, Massachusetts, the Crest Manufacturing Company was a supplier to other early automobile manufacturers. They finally realized that they built so many parts that they could just build their own car – and so they did. The first “Crest”-branded automobiles were three-wheelers but by 1901 the four-wheeled Crestmobile was available.

Three models were offered at the start, with the mid-range Model B sporting a 3.5 horsepower single-cylinder engine mounted out front that can be pull-started with a leather strap. This car resembles many other cars from the period, including the Toledo Steam car below.

Part of this particular collection since 1943, the Crestmobile you see here has been restored (though the date is unknown). Crestmobiles were only offered through 1905 before the marque disappeared. This one, perhaps the finest in existence, should sell for between $30,000-$40,000. Click here for more info and here for more from this sale. 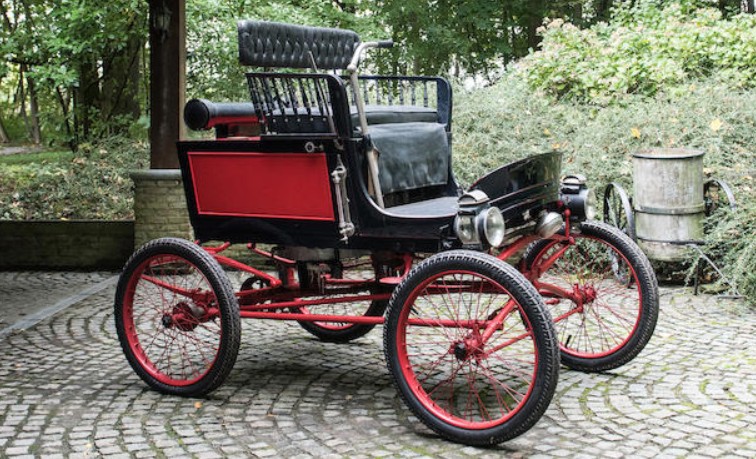 Okay, so maybe this doesn’t look exactly like the Crestmobile above, but you get the idea that they are pretty similar – except that this is a steam car. The Toledo was built by the International Motor Car Company of Toledo, Ohio, between 1901 and 1903. Beginning in 1904, once the company had been acquired by Col. Albert Pope, the cars were known as the “Pope-Toledo.”

Five different steam cars were offered by Toledo in 1902, with this Junior Runabout being the cheapest, costing $800 when new. This was also the last year the company offered steam cars, turning to more conventionally-styled gasoline-powered cars in 1903 before their acquisition.

This car sports an older restoration and it probably hasn’t been used all that much. It will require a little attention (and a boiler inspection) before use. This is a great opportunity to acquire a well-built early steamer at a fraction of the cost of a Stanley. It should bring between $33,000-$40,000. Click here for more info and here for more from this sale. 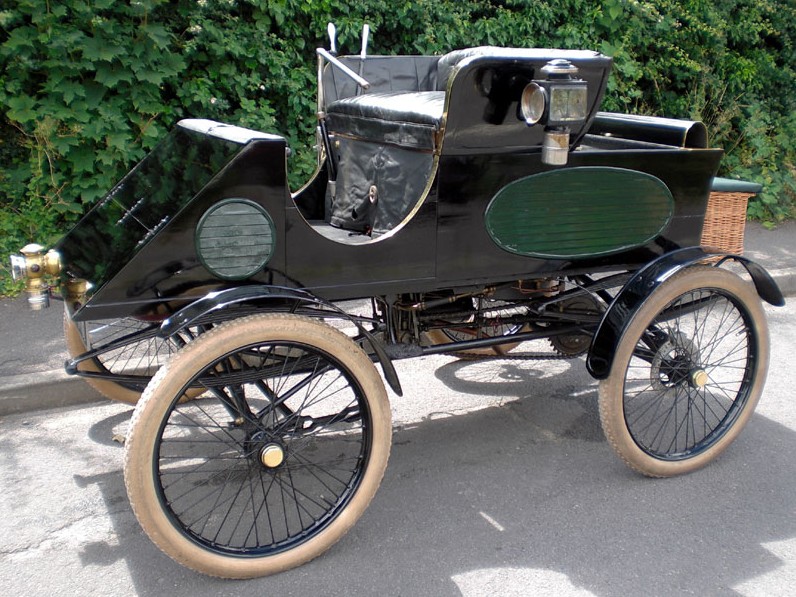 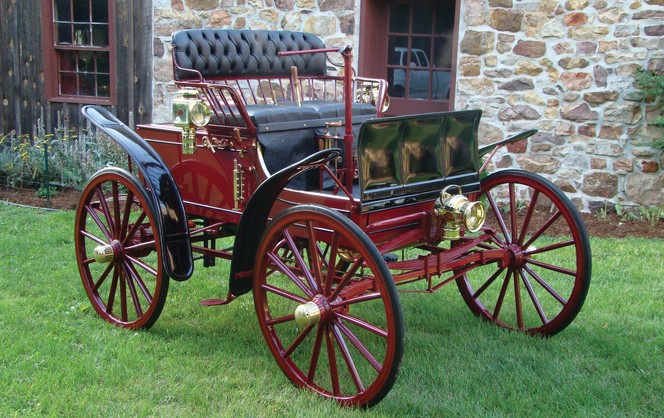 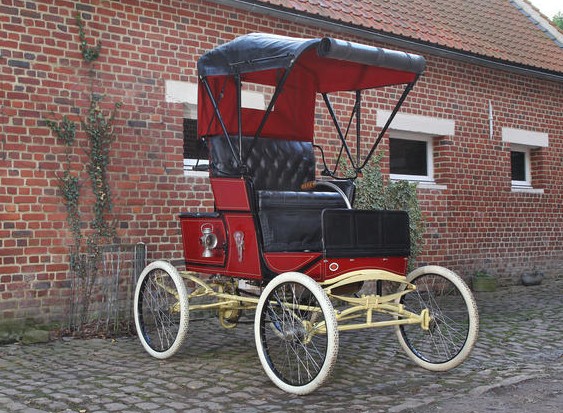 The Marlboro Motor & Carriage Company began producing steam cars in Marlboro, Massachusetts in 1899. The company was founded by Orrin P. Walker and existed only through 1902.

The engine is a Mason steam engine and this car cost $700 when new. About 30 were sold in 1900 and production ramped up. But then sales quickly dropped off and the company had all of its capital invested in product that was sitting in showrooms. And that was it for the short-lived company – out of business it went. 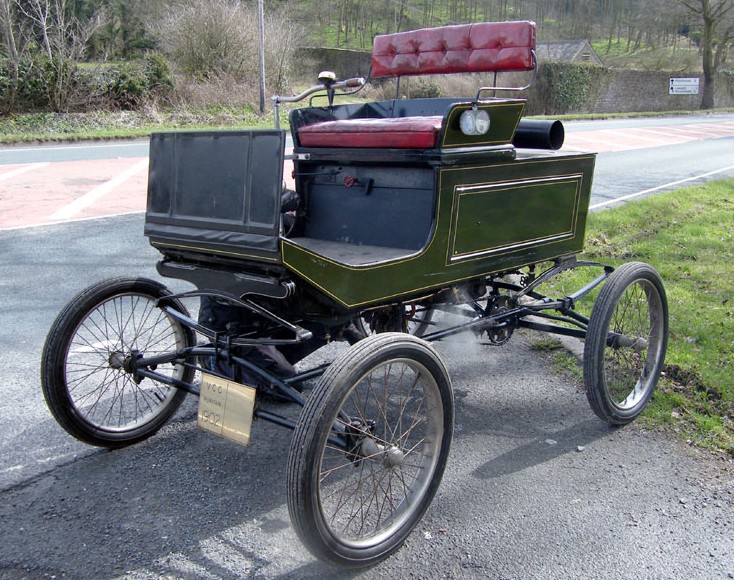 When Albert Locke took control of his father and uncle’s company in Salem, Massachusetts, around the turn of the century, he decided he wanted to do more than just build parts for steam engines. The Locke Regulator Company was getting into the car business.

In 1902, they launched their little runabout (designed in-house by Albert himself) that uses a straight-twin steam engine making six horsepower. Most Puritans were known to be ahead of their time (the cars, not the people) by featuring two things that would become standard on automobiles: a steering wheel and a foot throttle. However, this car has tiller steering. It could go 100 miles on one tank of water and could reach 20 mph.

Unfortunately, the company didn’t last in the car business for long, with production ceasing the following year in 1903. As rare as that makes it, surprisingly, there is at least one other Puritan steam car in England. This one isn’t exactly in concours-level shape, but it is usable – which is the most important thing. Price is not listed but you can check out more here.

The Milwaukee Automobile Company began producing steam vehicles in 1900. There were a bunch of steam car manufacturers in the United States at the turn of the century, and a number of them were producing light runabouts that looked just like this.

Unfortunately, this marque only lasted through 1902 – and not even through the entire year. Quite a few other early makes would shut down just as quickly. It was like a big game of Economic Darwinism Whac-A-Mole. Companies were popping up and shutting down all over the place.

This is a rare example of an already rare marque. It’s two-cylinder steam engine makes six horsepower. It’s only a four-owner car, with all owners and history known – which is a pretty incredible feat considering it’s 112 years old. The car should bring between $20,000-$40,000. For more information, click here. And for more from RM at Hershey, click here.