Vallèe is a name that pops up a few times during the course of automotive history. For instance, Paul Vallèe built microcars in the 1950s. Henri Vallèe, however, is the man behind this car. He got his start working with Amadée Bollée in the 1880s, building a steam car. Vallèe set up shop as a bicycle manufacturer shortly thereafter and built his first car in 1895.

Production followed in 1897 and offered a range of four different models. This is a four horsepower (second from the smallest) model powered by a 2.2-liter flat-twin. Production continued until 1902 when the company shifted focus to motorcycles before shutting down a few years later.

This is one of two known Vallèe automobiles in existence. This car is all original except for it’s paint and top. It’s pretty interesting and is coming from a Swiss collection. Click here for more info and here for more from this sale. 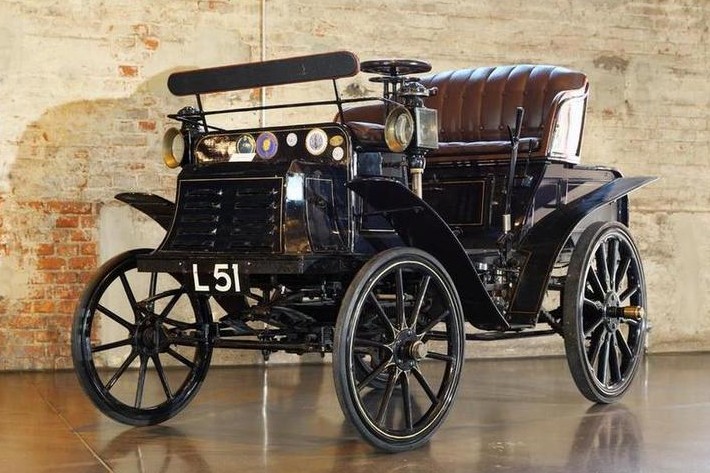 From the “Wow, That’s Old!” files, we present this archaic 1895 Millot Vis-a-Vis, built by Millot Frères (the Millot Brothers) in Gray, France. The company was founded in 1805 to produce farming equipment. By 1892 they were making stationary engines and sometime around 1895 they began building these rather crude-looking vehicles. It looks like something that just drove off the railroad tracks and onto the street.

It’s referred to as a “saw-bench” and they built an unknown number of them (at least three survive). It is powered by a nine horsepower, 2.0-liter single-cylinder engine. I can’t even begin to imagine the noise that this thing makes – or how it drives, handles or rides. It is simply something from another era that very few will get to experience.

This is showcased as an 1895, but various sources suggest different dates for the first Millot automobile – some as late as 1899. The company did build more traditional cars beginning in 1901 (through 1902), but none are known to survive. I’ve seen a photo of one and it looks light years ahead in terms of design when compared to the car shown here, even though only a few years separate them. Cars simply just don’t come much older than this. Price is “on request.” Click here for more info.