If this car looks massive it’s because it is – in every way. At 5200 pounds it’s not exactly a Lotus. But under the hood there’s a whole lot of power: 1350 horses.

Conceived, designed and built by Omaha native Tom Cramer in the early 1950s, the Cramer Comet features a number of  innovative design aspects. First is the chassis which is built out of nickel-steel refrigerator tubing. Then he popped in a 1350hp Allison V12 aircraft engine.

The body is styled after a number of standard 1950s designs. Oldsmobile, Buick, Lincoln, and Studebaker design cues can be seen in this car. What I found most interesting is that the windshield is actually the rear window from a DeSoto.

The interior of the car isn’t exactly glamorous but it’s certainly intriguing with the aero-theme continuing onto the dash. 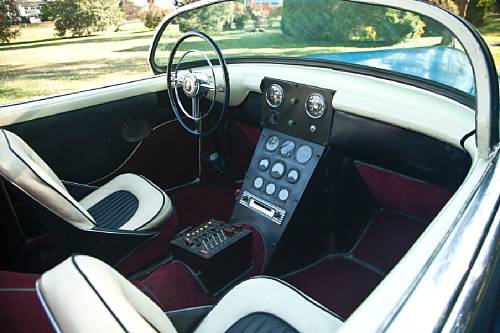 It looks to have come straight out of a WWII-era aircraft with function trumping form. The dials on flat, plain-looking black metal. I wonder if it has an attitude-indicator. The car is one-of-a-kind and is being offered for sale from a private collection – the only other owner save for the Cramer family.

Pre-sale estimates range from $100,000-$150,000. Here’s your chance to own something completely unique that will blow a Bugatti Veyron away on a dyno. More info can be found here and the rest of Bonhams’ catalog here.