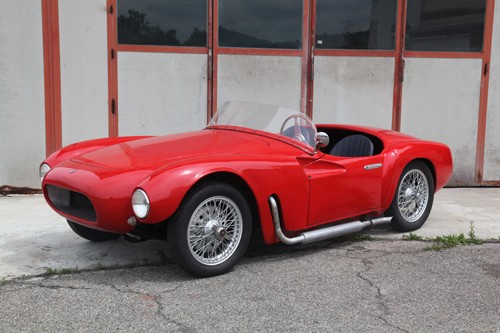 Moretti built a number of small sports cars using a 750cc engine. This is one of them – but it seems like everyone I come across has a different body on it. The body here was evidently designed by Giovanni Michelotti. I’m not sure who built it. It kind of resembles a Ferrari 250 Testa Rossa – or at least that’s what I can see inspiring it. “Bialbero” refers to the engine being a “twin cam.”

1953 was Moretti’s first go at racing. Since the 750 was the larger of the two engines they used in their cars, it was a natural fit for the race tracks. This car was owned by the French importer for Moretti who raced it a little bit in Venezuela (where he was from), but  he preferred Ferraris and saved them for the big events, like Le Mans.

He sold it to one of his countrymen, who raced it until 1960. The car returned to Europe in the 1980s when it was restored and it was restored again a few years ago. Morettis are rare, but this is probably the only one bodied like this (just guessing). It should sell for between $315,000-$370,000. Click here for more info and here for the rest of Coys nice auction lineup.