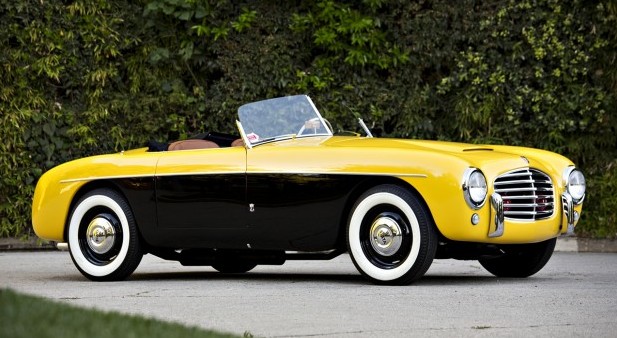 The Daina was Siata’s third road car, having been introduced in 1950. Production would run through about 1958. Siata is one of those smaller sports car companies where record keeping came second to building cars and many figures contain qualifiers like “about” or “estimated.”

The Gran Sport bodystyle (by Stabilimenti Farina) that you see here was the most successful Daina model and the one that is best remembered. Depending on who you ask, between 50 and 100 Gran Sports were built. The chassis is a modified version of the Fiat 1400 and it also uses a modified version of that cars engine: a 1.4-liter straight-four making about 65 horsepower.

These were popular in SCCA events in the 1950s having been cut out of the rule books in Europe shortly after their introduction. The history of this car really isn’t known prior to the last 25 years, when all that is known is that it was a restoration project that never got started. An actual restoration was completed in 2012 and it looks spectacular. This is a rare car that is fresh as if it just left the factory. It is the earliest Daina Gran Sport known and should sell for between $250,000-$325,000. Click here for more info and here for the rest of Gooding & Company’s Arizona lineup.