George B. Selden is one of the most interesting men in the early days of the automobile. He was an inventor and lawyer and he made one the the most fantastic business moves in history. And it didn’t work out. 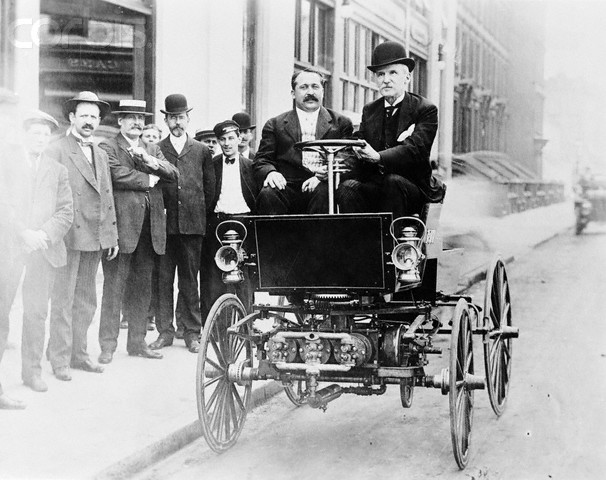 George Selden driving an automobile in 1905

Selden was born in Clarkson, New York in 1846, so by the time automobiles came around, he was a seasoned lawyer and Civil War veteran. Selden saw his first internal combustion engine in 1876. It wasn’t a practical machine and was quite large. So he went to work making a smaller, more usable version – and did, in 1878 – eight years before Karl Benz introduced his Patent Motorwagen.

He applied for a patent in 1879 but not just for his useful internal combustion engine, but also for its use in a four-wheeled car. The patent was finally granted in 1895 – about the time America’s auto industry began to take off.

Selden sold his patent to the Electric Vehicle Company (who were building electric vehicles and therefore exempt from any patent-infringement on Selden’s internal combustion engine but who could, with the patent in hand, theoretically exclude other gasoline-powered manufacturers from springing up) for a royalty of $15 per car and a minimum annual payment of $5,000.

But there were already other car manufacturers building cars. Some of them came together and formed the Association of Licensed Automobile Manufacturers (ALAM) in 1902. The group was headed by Alexander Winton, owner of the largest internal combustion-producing automobile company in the United States at the time. The Electric Vehicle Company was suing a number of companies for patent-infringement, so Winton joined with Cadillac, Packard, Locomobile, Knox, Peerless, and others to fight the lawsuits.

And it worked. In exchange for fighting the suits, Selden granted those companies favorable rates – a 1.25% royalty on all cars produced. And they became his enforcers. In order to get a Selden license, you had to get into the ALAM. And ALAM members wanted to protect their business, so they weren’t very welcoming. In fact, when Henry Ford applied to a license, he was denied at the request of Oldsmobile’s member to the organization.

But we all know Henry Ford was never to be denied. So he built his cars anyway. ALAM threatened Ford’s buyers with lawsuits. Selden filed suit against Ford. Ford said, essentially, “Screw you” to everybody and went about his day.

Selden didn’t actually start building his own cars until 1906, in the midst of the legal battle with Ford. Ford argued that his engine was based on the Otto engine (which it was) and not the Brayton engine, of which Selden based his patent on. The court eventually sided with Ford and ruled that the patent was unenforceable. So the automobile industry exploded and Selden was no longer earning a cent. His funds dried up and so did his company. He died in 1922.

Imagine for a second if the court had ruled differently. The Ford name would probably still be well known, but the Selden fortune would be one of the largest in the U.S. Yes, his patent would have expired eventually (but with enough money and influence, there are all sorts of dubious channels that can be gone down to extend a patent), but for a long while, George Selden would have been making good money on every car sold in the U.S. But instead, it is just an interesting footnote in the history of the automobile. So it goes.

For a very in-depth version of this story, check out this awesome site.