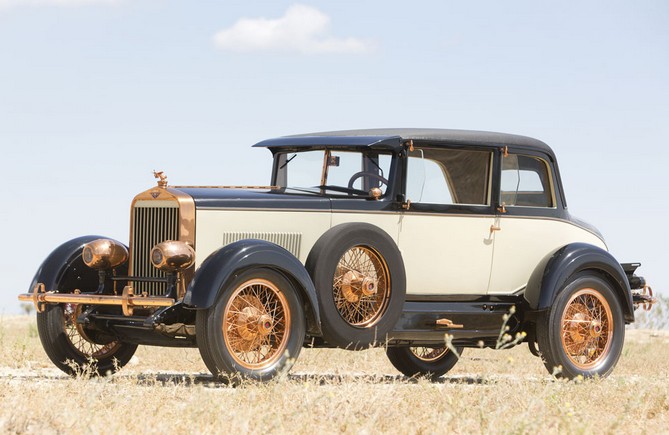 I’m not sure who the modern-day Eddie Rickenbacker is. We really don’t have one – there are not jack-of-all-trades celebrities any more, in fact, most celebrities don’t have a single talent about them. Eddie raced Duesenbergs at Indy (hell, at one point, he owned the speedway!). He was America’s #1 flying ace in WWI. He was a celebrity when the war was over. And in 1922, he attached his name to an automobile built by the men behind E-M-F.

The first Rickenbacker automobiles weren’t anything super exciting (although they were among the first cars with four-wheel brakes). The company lasted from 1922-1927, and in 1926, they introduced the best thing they ever made: the Super Sport. It uses a 107 horsepower 4.4-liter straight-eight. The bodies were essentially the passenger compartment of an airplane (seriously, go to RM’s site and check out the pictures – what a design).

This particular Super Sport was shown on the stand at the 1926 New York Auto Show. Someone in Michigan bought it off the stand. The copper wire wheels, bumpers and trim are outstanding – as is the flying airplane hood ornament. This car is a stunner. The original owner willed the car to his grandson, who sold it to Bill Harrah after one of Harrah’s guys tracked this, the only surviving Super Sport, down.

One thought on “Rickenbacker Super Sport”