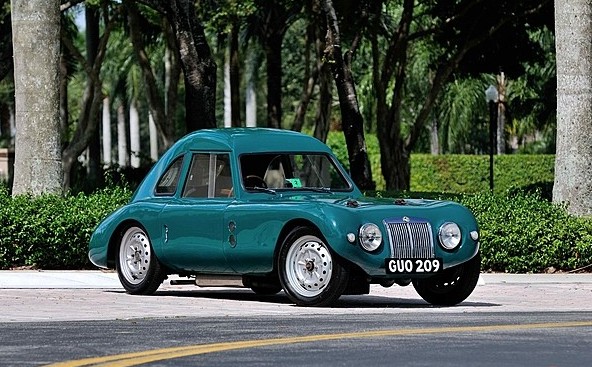 This car has been around the block recently. The auction block. Bonhams sold it in September 2012 for $33,000. It’s a one-off based around an MG. It was built by Harry Lester – a garage owner in Berkshire, England. He built an open roadster that fared well on the racing circuit. So in 1954, he turned to building a few coupes – only two are known to have been completed, and this is the only MG-powered car.

This car was built specially for tall driver Maurice Toulmin – hence the conversion van-esque roof and tall greenhouse. This car was competitive with subsequent owners, racking up wins at hillclimbs and speed trials all over England. The engine is a 1.5-liter straight-four from an MG TC.

It is thought that about 18 Lester cars were built and that only four survive. This one is one-of-a-kind. This one has spent many years in a museum and is offered for sale for the second time in two years. You can read more here and check out more from Mecum in Monterey here.