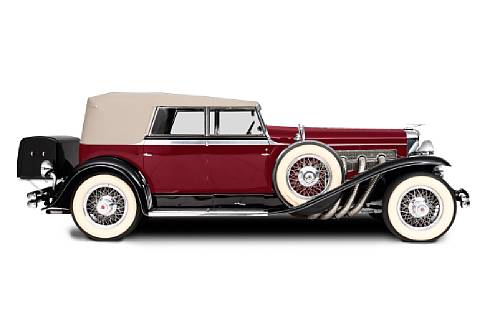 I guess you could say that I have a thing for Duesenberg’s. Especially Model Js. Expect that, if there is one coming up for auction and I can get the car description well enough in advance (I want to know the engine number), then we’ll feature it here.

This is J-355 and it features elegant Convertible Sedan bodywork by Murphy and the 6876cc straight-eight Lycoming engine making an incredible (for the time) 265 horsepower.

J-355 was transplanted into this car (chassis #2225) from another Model J – one that was owned by a famous Hollywood producer. The original engine for this car is J-204 and that engine now resides in another Murphy-bodied Model J (chassis #2374). Basically, the two cars swapped powertrains sometime during their long history.

This car has not been offered for sale for quite some time, having been on display in a European museum for quite some time. It’s time to get it if you want it. Bonhams’ pre-sale estimate is $650,000-$750,000. Yes, it has slightly appreciated since new when it cost a whopping $12,000 in 1929. Read the full background here and check out more from Bonhams here.