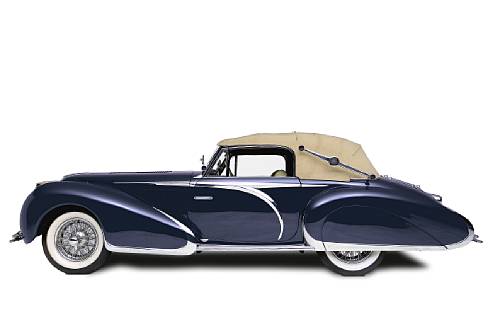 French coachbuilding firm Figoni et Falaschi is one of the most revered of all of the great coachbuilders and their work on Delahayes tend to be quite popular. This one is swoopy but it’s not as extravagant as some. It’s more along the lines of a post-war interpretation of a pre-war bodystyle.

This is the 135M model which means it has a 120/130 horsepower 3.6 liter straight six. Performance was sprightly, with the sports version of this car winning races across Europe – including the 1937 and 1938 24 Hours of Le Mans.

The 135 was in production from 1935 until Delahaye was purchased by Hotchkiss and production halted in 1954. About 2,000 of them were built using a variety of coachbuilders. Bonhams estimates that this one will sell for between $250,000 and $350,000. Find out more here and more on the auction here.