The Alvis TC 21 was sold in two forms, the first being the TC 21. It was only offered as a four-door sedan, although that didn’t stop coachbuilders such as Graber from turning it into a two-door convertible. The car was introduced in 1953.

Later that year, Alvis tweaked the formula a bit, offering the TC 21/100, aka the Grey Lady. It featured a top speed of 100 mph thanks to a revised exhaust and an increased compression ratio in the 3.0-liter inline-six. The TC 21/100 was offered as a drophead coupe, with bodies like this one sourced from Tickford.

Only 757 examples were produced between the standard TC 21 and the Grey Lady through 1955, making it about twice as rare as the TA 21 that preceded it and way more common than the ultra-rate TC 108G that came later. This one is expected to fetch between $96,000-$116,000. Click here for more info and here for more from this sale.

We’ve featured a good number of post-war Alvis sports cars. Okay, so they aren’t that sporty. But they were two-door coupes or drophead coupes, which are inherently sportier than sedans. The TA21 was the first of the “21”-suffix cars and was Alvis’s first new post-war car.

The TA21 was produced from 1950 through 1953. It’s powered by a 3.0-liter inline-six fitted with a single Solex carburetor for a factory rating of 83 horsepower. Top speed was 88 mph. Two body styles were offered: a sedan and a rarer drophead coupe, the latter of which carried a body by Tickford.

This particular car carries a later engine from a TC21. There were 1,316 TA21s produced, only 302 of which were convertibles. This one is selling at no reserve. Click here for more info and here for more from this sale.

Daimler’s DB18 was introduced just prior to the start of WWII in 1939. Production obviously halted while the fighting raged, but Daimler popped it right back into production after the war. The car was sold as the “Consort” in export markets, where it proved very popular in India.

The DB18 was based on the pre-war New Fifteen model, but instead of that car’s 2.1-liter engine, the DB18 received a new 2.5-liter inline-six rated at 70 horsepower with a single Solex carburetor. Top speed in 1951 was 82 mph.

The first cars were all coachbuilt, but Daimler ended up selling a popular sedan that was bodied in-house. Only 608 Special Sport models were produced between 1946 and 1953, making this car pretty rare. It carries drophead coupe by by Barker as well as a pre-sale estimate of $48,000-$55,000. Click here for more info and here for more from this sale.

Lagonda has an interesting history of being a marque, then a model, then a marque again. The 2.6-Litre was the first model produced by Lagonda after the company was acquired by David Brown, who paired it with his other baby, Aston Martin.

The 2.6 was produced between 1948 and 1953, and just 510 examples were built, split between four-door sedans and two-door drophead coupes. The engine is a 2.6-liter inline-six that, in Mk II form as seen here, made 125 horsepower.

The current owner of this car bought it five years ago, and it was restored prior to that. It carries a pre-sale estimate of $83,000-$110,000. Click here for more info and here for more from this sale.

One of the grand French “Ds”, Delaunay-Belleville was one of the more expensive options when shopping for a French car, pretty much from their inception in 1904 on into the 1920s. The P4B was introduced in 1922 and would last until 1927, which was about the time the company started to fade away.

It is powered by a 2.6-liter inline-four, and the car retains the company’s signature circular grille, although by this point it was more of an oval. Though a two-door, this car is likely larger than it looks and has sort of a Bugatti-ish feel when looked at from the front.

Delaunay-Belleville cars were expensive when new and were not sold in the largest of numbers. They remain rare today – and expensive. This car carries an estimate of $71,000-$94,000, which is significantly cheaper than other cars from this marque that we’ve featured. Click here for more info and here for more from this sale. 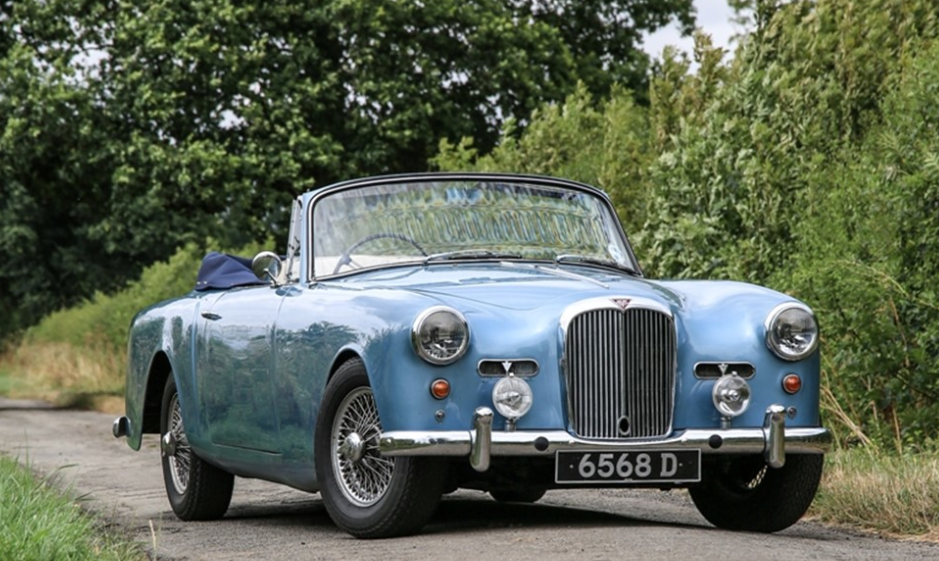 The Alvis TD 21 was a big jump, design-wise, for Alvis. The TC 21 was a much more old-school British automobile and the TD 21 (and transitional TC 108G) looked thoroughly modern for the late 1950s. Something you could compare to an Aston Martin of similar vintage. The TD 21 was built between 1958 and 1963 before being replaced by the TE 21.

This 17,000-mile example has an automatic transmission which has been rebuilt. It’s a classy British drop-top that’s ready for touring. It should bring between $69,000-$79,000. Click here for more info and here for more from this sale.