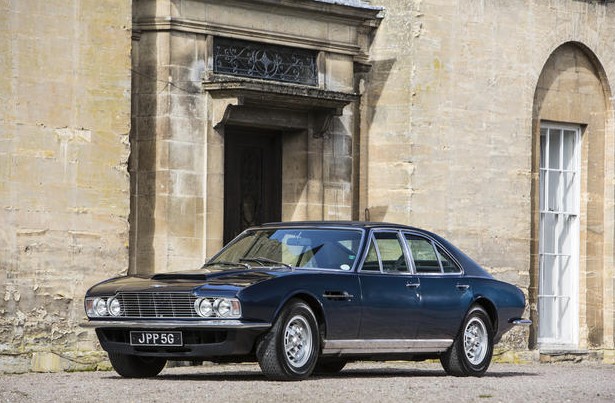 You’re looking at the first 4-door Aston Martin. The Lagonda Rapide was David Brown’s attempt at reviving the Lagonda marque, which Aston Martin acquired in 1948. The Rapide lasted from 1961-1964. But that was a Lagonda. In 1969, Aston itself hand-built a prototype four-door version of their two-door DBS V8 and called it the Lagonda. This is that car.

It uses the same 5.3-liter V-8 from the DBS making about 315 horsepower. The Lagonda entered production in 1974 and it was short-lived, ending the following year. Only seven ended up finding homes. This was Sir David Brown’s personal car.

The Lagonda would change shape for 1976, taking on a boxy, angular form that is much more well-known (although, not necessarily more well-liked). The design of this car actually reminds me of a Monteverdi sedan I filmed last year. At any rate, this is the prototype for a run of only seven cars – so it is exceptionally rare. And being David Brown’s personal ride only adds to it. The pre-sale estimate here is $540,000-$640,000. Click here for more info and here for more the rest of Bonhams’ Aston Martin sale.