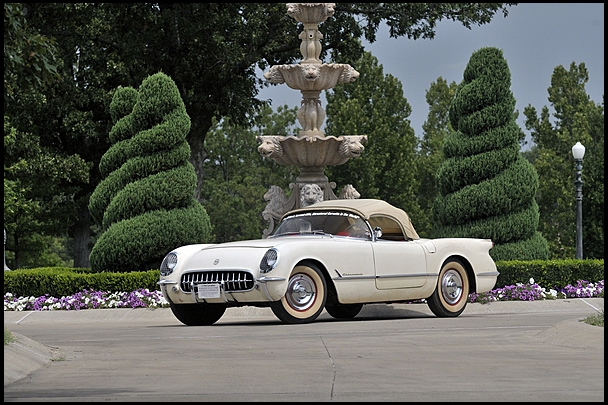 The Chevrolet Corvette was introduced for 1953 and it was powered by a 150 horsepower “Blue Flame” six (3.9-liter straight-six). It was a sports car but performance really wasn’t mind-blowing. A V-8 would come in 1955 to match Ford’s Thunderbird.

There is something extremely special about this ride: it is known as the oldest, lowest-mileage, unrestored Corvette in existence. It’s covered just 2,331 miles in its life – and there’s a reason for that. The original owner drove it until 1959, when he ordered it buried under one of this stores until 2000. It has been coined the “entombed Corvette.” It was exhumed in the 1980s and preserved since. If you want to see what a 1954 Corvette looked like when it left the factory, this is the car you want to see.

A perfect ’54 Vette will bring about $100,000 at auction. With “survivors” being very much in right now, we’ll see what kind of premium this car brings. Click here for more and here for the rest of the lineup from Mecum’s Bloomington Gold sale.