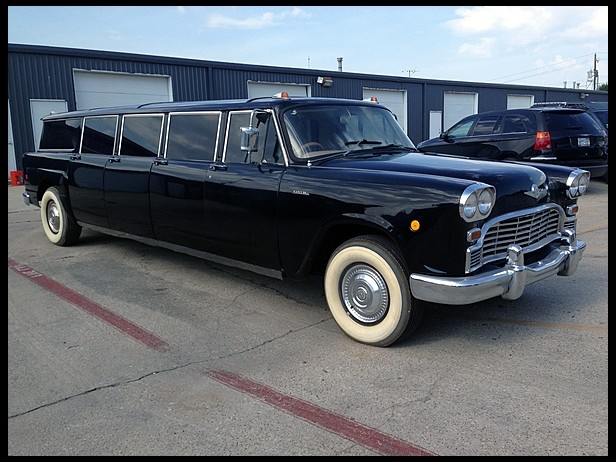 So this isn’t technically a bus – but it is rather lengthy. Checker is an interesting marque because they lasted a lot longer than everyone probably thinks – and most people don’t even remember they existed at all off the top of their head anyway. That, and they built basically the same lone model for over 20 years.

The Checker Marathon was introduced in 1960. It was the passenger-car version of the Checker taxi that was the go-to taxicab before the Crown Vic took over. The car remained in production, essentially unchanged, until 1982 when Checker ceased automobile manufacture. Did you remember that there was this “other” American automobile company producing sedans in the early-1980s? I bet you didn’t.

One step beyond (or many steps beyond, depending on how you look at it) the simple four-door Marathon was this, the Checker Aerobus. It was designed as an airport shuttle and I guess it would have been successful, as it seated as many as 15 people. They were available beginning in 1962 and could be had in two different wheelbases. This is the longer wheelbase that has eight side-mounted passenger doors. Which is a little ridiculous. I’ve always considered this the road-going cousin of those stretched golf carts you see in hospital parking lots.

The engine is a 5.7-liter Chevy V-8 making 200 horsepower. Non-taxi Checkers (although most road cars have since been painted in taxi livery) are extremely few and far between. The Aerobus is infinitely rarer. Only 3,568 were built by the time production ended in 1977. This one has a custom interior, but it’s still super cool. There are two other interesting Checkers in this sale. Read more here and check out the rest of Mecum’s Dallas lineup here.