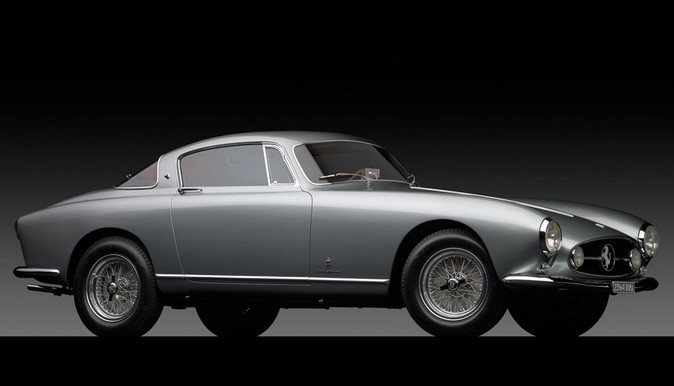 The 250 is one of Ferrari’s best-known classic model lines and also one of the longest lasting. The 250 started as a race car in 1952. A road-going version came a year later and the famous 250 GT series of cars started with the 250 Europa GT in 1954.

The Europa GT was the first road car to use the 3.0-liter Colombo V-12 engine. It made 217 horsepower in its introductory form. This model was also (for the most part) the last of the coachbuilt 250 GT cars. After this, nearly every 250 GT shared more of a standardized design, based on which model it was, of course.

This is number six of eight custom-bodied Europa GTs. It is definitely unique with that long sloping nose and a very alien looking grille with the big prancing horse in the center. The interior is orange (why not?) and was tailored by Parisian luxury designer Hermès.

Sold new in Rome, this car soon found its way to Seattle where it raced competitively (only once, although it did win its class). The restoration was completed in 2006 and it has won awards at the Cavallino Classic and Amelia Island Concours. This is the 26th Europa GT built of a total of 43 and it is the only one with this custom Pinin Farina coachwork. It is expected to sell for between $2,250,000-$2,750,000. Click here for more info and here for the rest of RM’s lineup.