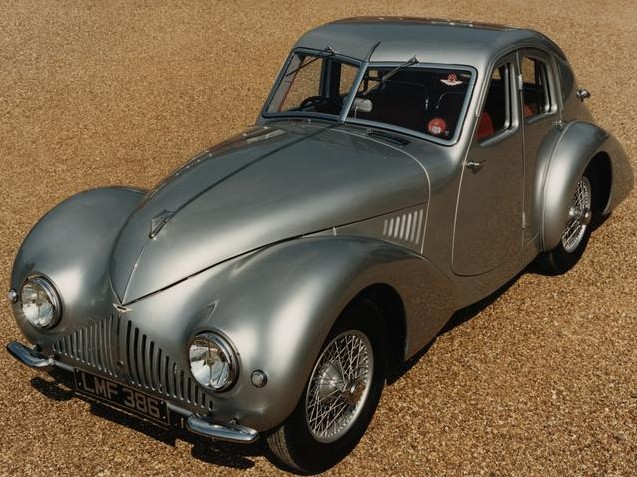 Aston Martin built their first car in 1915. The built sporty open cars in the 1920s and 30s, but the company we know that builds luxurious tourers didn’t take off until the 1950s. But there was one landmark car that kind of signaled the direction the company would take once David Brown took over after World War II. This is that car.

In fact, this is the car that caused David Brown to buy Aston Martin once he had the chance to drive it. What you see here is a one-off concept car – one of the first fully-functional concept cars ever built. It has an aerodynamic aluminium body and a tubular spaceframe chassis. It looks like a fastback coupe, but it actually has four doors.

It was driven over 100,000 miles by the then-owner of Aston: Gordon Sutherland. But the war broke out and it couldn’t be put into production. The engine was swapped out in 1945 for the new 2.0-liter straight-four that can also be found in the DB1. It makes 90 horsepower.

This car has only had a few owners in its life and has only changed owners once in the last 49 years. It has been maintained (meaning, presumably, never restored) over the years and used a lot – the odometer shows over 250,000 miles. This is a one-of-one car – the rarest Aston Martin there is. Bonhams isn’t listing a pre-sale estimate just yet, but they expect “many hundreds of thousands” of dollars. Perhaps more. You can read more here.