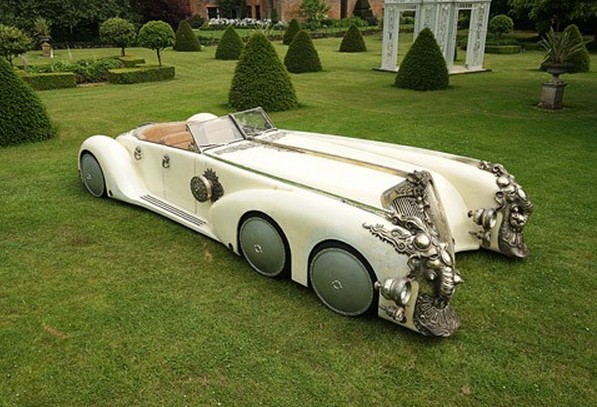 This isn’t our normal cup of tea, over-the-top movie cars without any real historical significance. But this ting is actually so crazy looking that it caught our attention. And, it runs and drives.

The League of Extraordinary Gentlemen is a superhero movie from 2003 starring Sean Connery that I will admit to having watched but have no recollection of whatsoever. The characters in the film are actually pretty interesting, ranging from Dorian Gray to Tom Sawyer to Captain Nemo. Nemo, of course, being from 20,000 Leagues Under the Sea, and captain of the Nautilus submarine.

Well this Nautilus was his road car. It is actually based on an old Land Rover fire tender and uses a Rover V-8. The front four wheels steer and it has four doors and no roof. It is ludicrously lengthy and was used in the film. Two were built but one was mounted with cameras for interior shots while this was used for distance. It does run and drive but is definitely not street legal. It is, however, quite decorative and interesting. It is estimated to bring between $23,500-$40,000. Click here for more info and here for more from this sale.

1 thought on “The Nautilus”