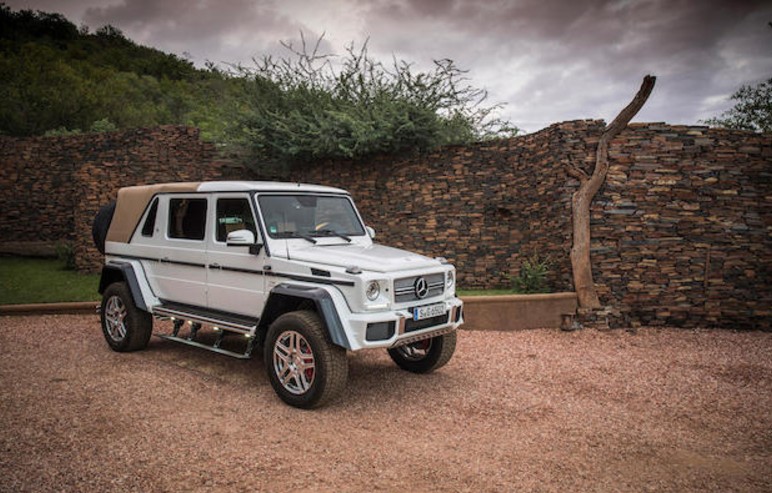 Mercedes-Benz built a six-wheeled version of their iconic G-Class a few years ago. It was pretty intense and easily one of the most over-the-top cars money could buy. And it sold out quickly. So in 2017, Mercedes, with their bizarre new marque structure where luxury models lose the “Benz” and get appended with the halfway resurrected “Maybach” name, decided to try and one-up themselves in the ridiculousness category: they built an extended-wheelbase Landaulet version of one of the world’s most capable off-roaders.

The current generation of the G-Class dates to 1990, though the exterior has been tweaked over the years to give every buyer that true “Russian Mob” feeling. The G650 Landaulet gets the AMG treatment under the hood (I guess luxuriousness trumps power when it comes to the car’s name). It’s powered by a 621 horsepower, 6.0-liter twin-turbo V-12. That’s almost as much power as a McLaren F1.

That tan part of the roof at the back folds down to give the rear passengers the open-air experience while fording rivers – which it can do because this car is also equipped with portal axles lifted from the super-macho 4×4² version of the G-Class. Oh, and those rear passengers are coddled in the same seats from the near-limo Mercedes-Maybach S-Class. This convertible luxury truck is basically the ultimate Daimler Parts Bin Special.

And it is being sold by Daimler. It’s a zero-owner car whose proceeds will benefit charity. Only 99 of these have been/will be built and they will all sell – mostly, I’d guess, to wealthy Middle Eastern oil barons. No estimate has been published, but the base price for one of these is supposed to be around $550,000. We’ll see what this one brings. Click here for more info and here for more from this sale.