The Traction Avant was one of a few cars produced worldwide that saw a pre-war introduction and continued post-war success. Part of that probably had to do with the financial state of France after WWII and the associated engineering costs for developing a new vehicle. It’s kind of crazy that a car designed for 1934 was still being sold in a Western country in 1957.

There were a number of variants and also a number of coachbuilt models. The 11CV model went on sale in 1934 and can be further divided into two sub-models. This is an example of the 11BL, which meant that it is powered by the 11CV 1.9-liter inline-four but rides on the 7CV chassis.

This car is one of three Cabriolets bodied by Robert Clabot, and if the design looks vaugely Saoutchik-like, that’s because Clabot was once employed by Jacques Saoutchik. This flamboyant example of a common French car should bring between $285,000-$400,000. Click here for more info and here for more from this sale. 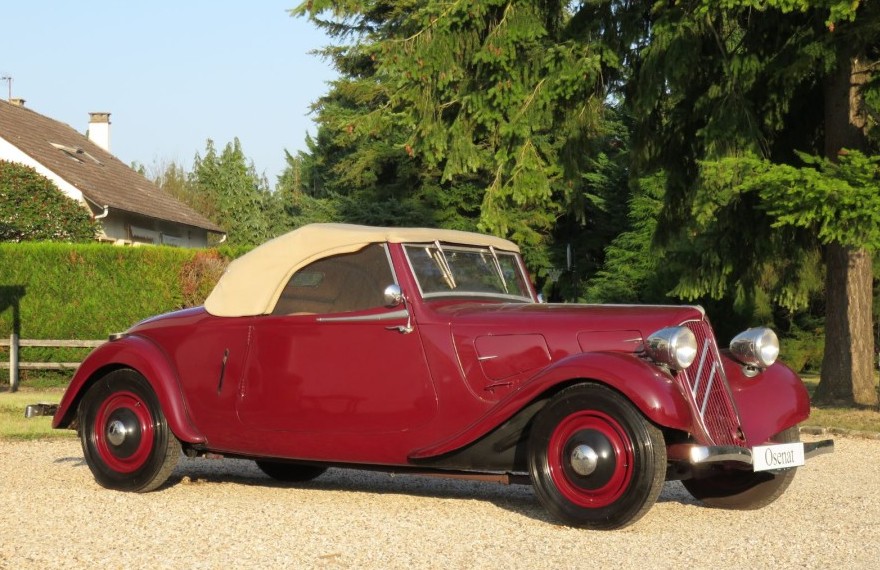 The Traction Avant is one of Citroen’s most classic models. Introduced in 1934, the model would take a few years off for WWII before returning after the war and being produced through 1957. They built around 760,000 of these things in various body styles. It was the world’s first steel monocoque front-wheel drive car.

Three models were produced over the years. This is a 7CV model – the lowest horsepower model they built. The 7CV was produced from 1934 through 1941 (when production was suspended). It was the only model not produced after the war.

The engine is a 1.6-liter straight-four driving the front wheels. The sedans are extremely French – it’s their definitive sedan. The coupes and cabriolets are actually very attractive cars. They’re often overlooked in favor of more prestigious French marques from the same time period. That said, this car should still command a hefty $90,000-$115,000. Click here for more info and here for the rest of Osenat’s auction lineup.