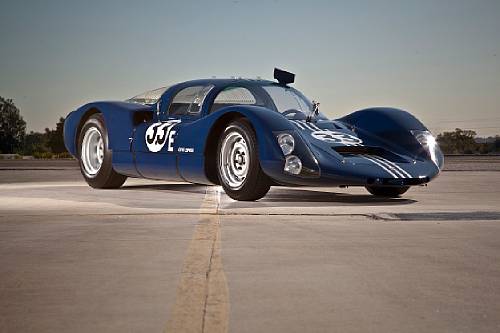 The long version of this car’s name is 1967 Porsche 906E Long-Nose, Short-Tail Endurance Racing Coupe. But to put that in metal badging on the car’s fender would weigh it down to the point where it would be uncompetitive.

This is the last street-legal race car Porsche built. It has a 220 horsepower 2.0 liter flat-6 and only 50 were built. This car was one of the last built and was retained as a Porsche-factory race car. It debuted at the 1967 12 Hours of Sebring with Joe Buzzetta and Peter Gregg, finishing 7th. Shortly after that, the car was sold into private hands where it continued racing.

Rare 1960s prototype race cars don’t come up for sale everyday. There have been a few Porsche 904s (the car preceding this) that have come up for sale recently and only one 906. The 906 sold for about $950,000 at this auction last year. Expect similar results this time around – if it sells. Read the full catalog description here and check out the full lot list here.