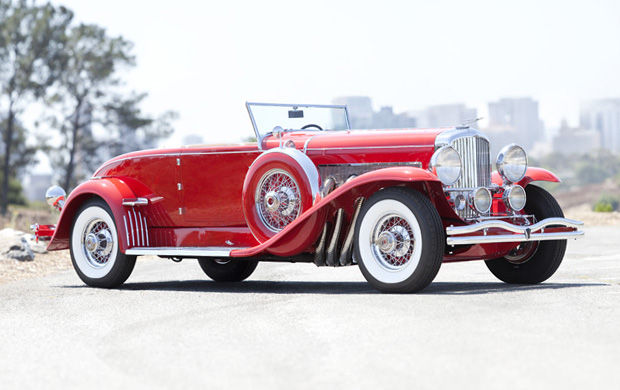 Hooray! Gooding & Co. has finally put up their catalog so we can all “ooh” and “aah” at some of the best cars money can buy. The first car we are going to feature from their 2012 Scottsdale lineup is this 1930 Duesenberg Disappearing Top Convertible.

This car is titled as a 1932 because it is titled by its engine number. J-284 was installed at some point and a supercharger was added. The Duesenberg SJ was the factory supercharged version but this is an aftermarket conversion. I’m picturing 1930s high-schoolers souping up their dad’s Duesenberg. Let’s be thankful there isn’t a giant wing on the back.

The supercharger (which actually was a transplant from an actual SJ engine owned the this car’s owner during the 1960s) ups horsepower from 265 to 320. So it moves. Ownership history is known from new.

The Disappearing Convertible Coupe bodywork is by Walter M. Murphy Co. of Pasadena. This body style is one of the most sought after and definitely commands a price premium over a four-door sedan variant of the Model J. There is something quite elegant – and sporty – about a car that appears to have no top. This would have been quite the car to be seen driving (or riding) in 1930.