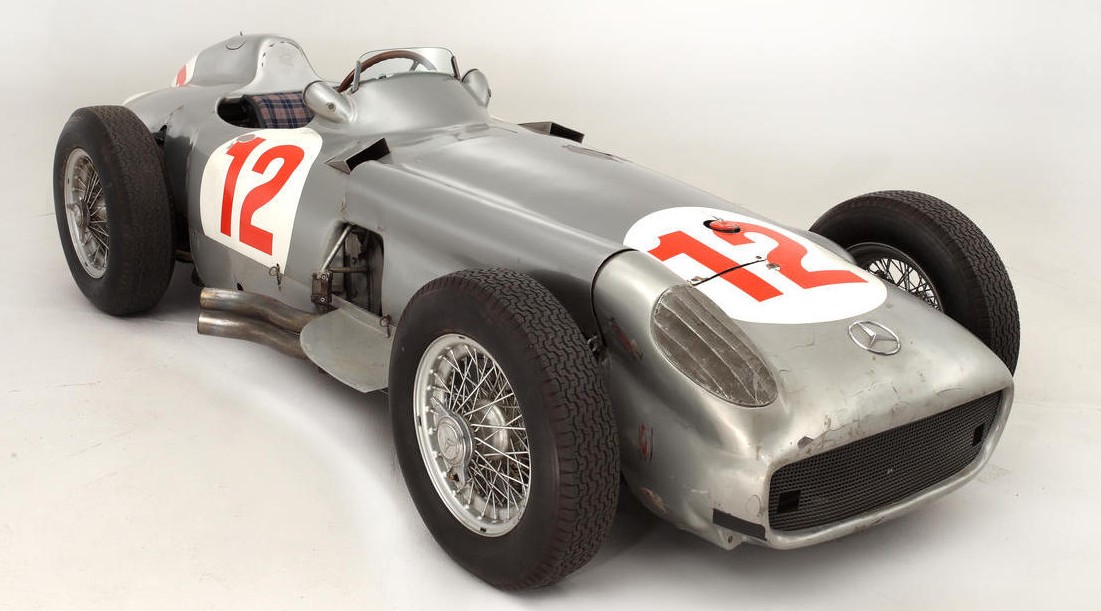 There’s been a lot of talk about this car and its forthcoming auction held at Bonhams’ sale at the Goodwood Festival of Speed. There’s talk of it breaking all kinds of auction records. It seems every time a car comes with that kind of talk, it mysteriously disappears and is never auctioned because it cannot be authenticated. Well this one can.

The W196 was Mercedes-Benz’s entry for the 1954 and 1955 Formula One seasons. Their drivers included Juan Manuel Fangio and Stirling Moss – two of the biggest names in the history of motorsport. Mercedes withdrew from competition of all kinds in 1955, and they went out on top with this car.

This is the only W196 that is not owned by Mercedes themselves or housed in a mega-museum. It is the only surviving W196 to have won multiple Grands Prix. Fangio clinched his second Drivers’ title driving this car. And it remains in nearly that state today – unrestored, original and complete. Mercedes has inspected the car and said that, with the exception of a few pieces, this is exactly how the car was prepared for its final race in 1955. That’s amazing.

Chassis #00006/54 can be lightly prepped and run in the condition it is in today. No need to restore it (please don’t!). The mechanicals are described as being pretty complex for 1954 and the engine is a naturally-aspirated 2.5-liter straight-eight making about 290 horsepower. It was a beast and its competition history is as follows:

After its final race, the car came into the control of Daimler-Benz’s “Exhibition Department,” which showed the car at events around the world. It was then used for testing in the 1970s before Benz swapped it for another car at a museum in England. When the museum wanted to add on to the their building, they sold the car. The new owner sold it a while later to a man who paid a world record (and undisclosed) price for it. In the 1990s, it was acquired by Friedhelm Loh, a German businessman, who ran the car in a few historic races such as the Monaco Historic Grand Prix and the Goodwood Festival of Speed. Then he sold it. Now it can be yours, if you happen to be wealthy in the most villainous of ways.

Obviously, no estimate was provided for this car because anything that has sold for a “world record price” is unlikely to have an estimate attached to it. It should bring an incredible amount – should it actually meet its reserve. I have to say, this is a very exciting car, as cars of this magnitude so rarely come up for sale. And to think, what could end up being the world’s most expensive car could have plaid seats! Only 14 W196s were built and only nine survived until Daimler decided to restore a written-off chassis. Now there are ten of them – and this is the only one you can buy. Daimler owns seven of them and two are in other museums.

1 thought on “The Only W196 Mercedes in Private Hands”