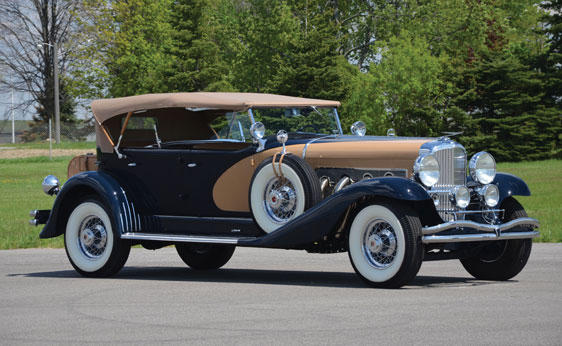 This is an actual Model J Duesenberg but it’s had some work done to it. When new, it was delivered to the Vice-President of the Cord Corporation with a LaGrande Dual-Cowl Phaeton body that looked exactly like the one you see here.

Apparently he used the car for some time before putting a Willoughby Berline body on the car and selling it as a new car (nothing like being the head of an automaker and more or less just making up a car’s “newness” factor because it’s convenient to you). Anyway, it sold and the chassis/engine numbers are both near the very end of Model J production – almost as high as you can go as 1937 was the final year for Duesenberg.

Some time later, the car was re-fitted with the body you see here. It’s an exacting re-creation of the original LaGrande Dual-Cowl Phaeton. It is not original but plays the part very well. It has also had a supercharger added to it to bring the 6.9-liter straight-eight up to “SJ” specification and 320 horsepower. It is not a factory SJ car.

This is a very desirable body style, even though it is not original. But it should still bring a very nice price (in the $600,000-$1,000,000 range). Click here for more info and here for more from Auctions America’s Auburn Fall sale.