The Swallow Coachbuilding Company started building their own cars in 1932. The first model launched was the SS1. Bonhams quotes a total of 2,503 examples produced through 1936. SS, of course, would become Jaguar after WWII and the resulting new associated connotations with “SS”.

The SS1 was powered by a choice of inline-six engines, with this car being powered by the later, larger 2.6-liter unit. There was an SS2 that featured a four-cylinder powerplant. Output in this car was rated at 68 horsepower.

Five body styles were offered, including the tourer shown here. It remained with a single family for about 50 years, being restored early in their stewardship. Now it has a pre-sale estimate of $78,000-$105,000. Click here for more info.

Hanomag was a producer of heavy machinery and motorcars that was essentially founded in 1871 by Georg Egestoff as a company with a different name that produced steam engines. Automobile production lasted from 1925 through 1940, although commercial vehicles remained available until the 1970s.

The Type 15 was introduced in 1933 and was offered as a few different submodels, including the Record 15 K, which was produced from 1934 through 1936. Power is from a 1.5-liter inline-four that made 32 horsepower. A few body styles were offered, including a sedan and a convertible with a body from Ambi-Budd. That is what this car has.

They were not very common when new, and they are about as rare as they come today, especially the convertible variant. This one was restored over many years and is expected to sell for between $32,000-$46,000. Click here for more info and here for more from this sale.

Mercedes-Benz offered a variety of factory body styles for their 500K touring car. These included sedans, various roadsters, and the very popular cabriolets. But there were outside coachbuilders that also put their personal touch on examples of this chassis. And this one is brilliant.

The 500K was sold between 1934 and 1936 before it was replaced by the 540K. It is powered by a supercharged 5.0-liter inline-eight that was rated at 160 horsepower with the supercharger engaged. Top speed was over 100 mph.

Only 41 500Ks were sold as bare chassis to be bodied by independent coachbuilders. This car features one-off coachwork from Windovers, a British coachbuilder. It’s a three-position roadster, meaning the top can be all the way up, all the way down, or at an awkward place in the middle.

The car was purchased by the current owner in 2006 and later restored. It has a real Count Trossi SSK vibe to it, which is awesome. No pre-sale estimate is available, but you can read more about it here. Check out more from this sale here.

This thing is awesome. Let’s start with Morris Commercial, which was – as you’ve probably guessed – the commercial vehicle arm of British automaker Morris. It was founded in 1924 and was phased out during the British Leyland consolidation of the late 1960s.

The original CS8 was introduced in 1934 and used a 24-horsepower inline-six engine. They were built in every imaginable body style variant that the military could need. The big problem was that they were very heavy and only rear-wheel drive. Production lasted through 1942 when it was replaced by the 4×4 C4, which was in turn replaced by the popular C8 in 1944.

H&H describes this as the “finest example” they’ve ever encountered. I mean, I have never seen another one, but I can’t imagine there is a nicer one around. The pre-sale estimate is $55,000-$69,000. Click here for more info and here for more from this sale.

The creatively-named “Big Six” was Vauxhall’s big six-cylinder car that was offered between 1934 and 1940. The model was actually updated midway through its life cycle, and the second generation of the car went on sale in 1937.

The BX/BY, or first, series of the Big Six spawned a third variant: the long-wheelbase, coachbuilt BXL. This example carries a limousine body by the Grosvenor Carriage Company of London. Power is from a 3.2-liter inline-six that could push the large car to 72 mph.

Only 796 examples of the BXL were built, and this is one of nine known to still exist. It’s got suicide rear doors and a luxurious rear passenger compartment. The pre-sale estimate is $15,000-$18,000. Click here for more info and here for more from this sale. 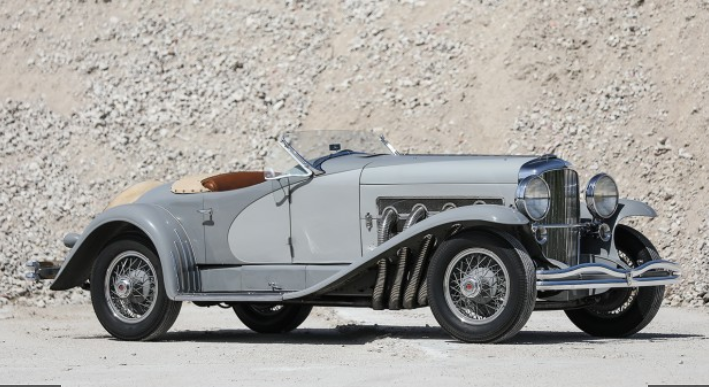 So why is this among the most exciting cars to come to market in at least a decade? Well, for one it’s among the greatest American motorcars ever made and two, it’s been in a long-term collection that you’d think would never consider parting with it. More on that in a minute.

The SSJ was the ultimate evolution of the already-amazing Duesenberg Model J. The Model J transformed into the awesome “SJ” when a supercharger was added. That bumped power from 265 to 320. Duesenberg developed two “SSJ” cars – they were also supercharged and had an exceptionally short wheelbase. Power from the supercharged 6.9-liter straight-eight was bumped to 400 horsepower for the SSJ, thanks to parts borrowed from the “Mormon Meteor” land speed record car.

400 horsepower. In a road car. In 1935. How are you still even reading this? Shouldn’t your mind have been blown by this point? It would be another 20+ years before American roads saw that kind of stock horsepower again.

These two SSJs – this one, the first one, was sold new to Gary Cooper. The other one, in 1936, went to Clark Gable. The legend is that they would race these two Depression-era supercars in the Hollywood Hills. The fact that these two huge stars both got one of these cars is no coincidence. Duesenberg thought the publicity might help save the company. Unfortunately, it didn’t.

Cooper only kept the car a short time (and reportedly had it repainted shortly after taking possession) and it had seven other owners before Briggs Cunningham acquired the car in 1949. In 1986, Cunningham’s collection was sold to Miles Collier and it’s been a highlight of that collection since, spending quite a while on display in the Revs Institute in Naples, Florida. It was at this extensively-financed museum that I pretty much assumed this car would stay forever. But it isn’t. Anyone can buy it – well anyone with “In Excess of $10,000,000+,” as Gooding & Company hilariously estimates it will bring.

At any rate, it’s an iconic piece of American motoring history that might get locked away again for a long time. It’s exciting to see something like this come out from behind the doors of a big collection. Click here for more info and here for more from Gooding & Company.