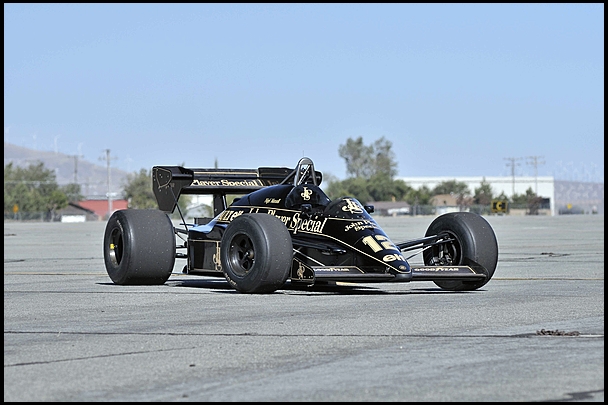 There are a few racing liveries that really stand out above others. Among them: Gulf, Martini and – of course – John Player Special. The tobacco company started sponsoring Lotus Formula One cars in 1968. This black and gold paint scheme would be a part of F1 through the 1986 season and the current Lotus F1 team uses the colors – albeit with different sponsors.

The Lotus 94T was raced at the end of the 1983 Formula One season without much success (a lone podium and many retirements). It was competitive, but not great. For 1984, Lotus introduced the 95T. It was powered by a Renault-Gordini 1.5-liter twin-turbocharged V-6. In race trim it made about 700 horsepower. For qualifying, that number was bumped up over 1,100! Four cars were built for that season to share between Lotus drivers Nigel Mansell and Elio de Angelis.

This car was driven by Mansell and includes the following race results (I can’t find if Mansell drove this particular car at more races than this or not):

It has since been retrofitted to accept computer input, making it easy to start and drive today (for historic events and parade laps). This is a Turbo Era F1 car that was raced by an F1 Champion. It’s also from one of the racing’s most storied manufacturers and carries one of racing’s most emblematic paint schemes. It can be yours for a price they won’t estimate. Click here for more info and here for more from Mecum in California.