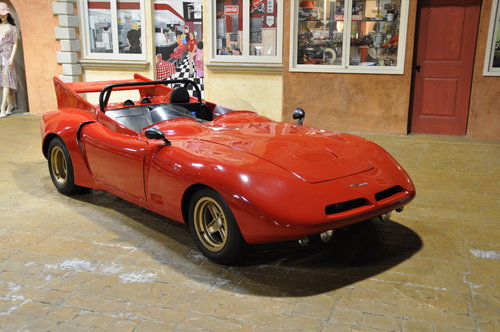 Ever seen this car before? Me neither. Giotto Bizzarrini was active in automotive design and engineering back in the day. Specifically, he got his start at Alfa Romeo in the mid-1950s. He wasn’t there long before he jumped ship to Ferrari (you can thank him for the 250 GTO). In the early-1960s, he worked for Iso Rivolta.

In 1964, he left Iso and founded his own company, Bizzarrini S.p.A. He wanted to build race cars and as an aside to that, he built precious few road cars. This lasted until 1969. Strangely, however, once his company shut down, Bizzarrini continued to churn out cars – and still does today – mostly one-off prototypes. In the early-1970s, he built a pair “single-seat competition barchettas” – and this is the prototype (the other is a race car).

The race car variant is in the Italian National Car Museum in Turin – making this 128 the only one in private hands. And it can be yours. No pre-sale estimate is available. Click here for more info and here for more from Russo & Steele in Monterey.