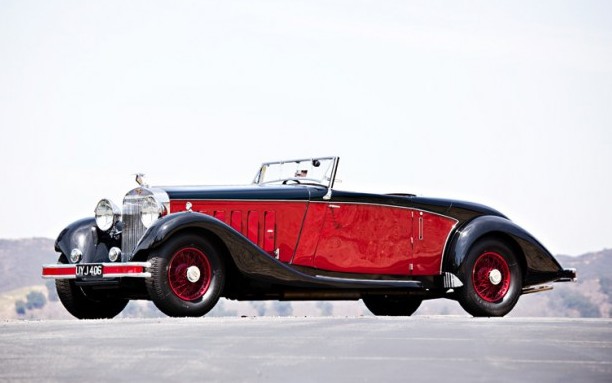 The J12 was introduced in 1931, replacing the very popular H6 line of cars. It was the top-of-the-line model offered by the company. It used a 11.3-liter V-12 making 250 horsepower. That’s pretty powerful and that’s also a huge engine. Only about 100 were built before the company made the switch to aircraft engines in 1938. Only about 42 to 46 still exist.

They were powerful so they could carry extravagant coachwork – and this car is no exception. Fernandez et Darrin was the successor company to the more well-known Hibbard & Darrin. Same Darrin, new partner (yes that sounds like the tag line for a bad buddy-cop TV show). The body was originally a Sedanca Coupe from the same coachbuilder, but it was modified to its present configuration by a later owner.

This car changed owners over three continents since it was built and has been restored and taken care of. It’s a performer and a looker and the catalog says it’s an “incredible opportunity to return its body to the original… configuration” in order to display it at the most prestigious of car shows. I have to wonder what kind of price it would bring had it kept its original body – as the pre-sale estimate is $2,000,000-$3,000,000. Click here for more info and here for more from this sale.