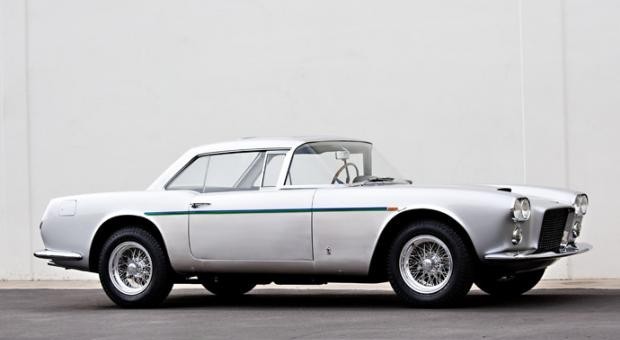 If you compare this Ferrari 400 Superamerica to the other one we had featured in the past, you would see that the name “Aerodinamico” is very accurate to describe that car – especially in comparison to this one. This car looks downright boxy by comparison – but it also looks like it has been italicized – like the whole thing is leaning forward, itching to grab a gear and go.

This car was bought new by Gianni Agnelli – then-chairman of Fiat (a company that his family founded). The 400 Superamerica was the follow-up to the 410 Superamerica. It uses a 4.0-liter V-12 making a serious 340 horsepower. This was the first one built.

The styling by Pinin Farina is one-of-a-kind. Agnelli requested that it look like a Ferrari – and it does – but there are custom touches all around. He sold it in 1962 and it quickly became owned by actress Anita Ekberg – who thankfully never drove it through a fountain. It bounced around between owners after 1967 and in the early 1980s was donated to the Harrah Collection. The restoration was completed in 2004 under the care of its current owner.

Only 47 Ferrari 400 Superamericas were built and this is both the first one and the only one with a body like this – not to mention its unique and interesting ownership history. It should sell for between $3,750,000-$4,500,000. Click here for more info and here for more of Gooding & Company’s auction lineup.