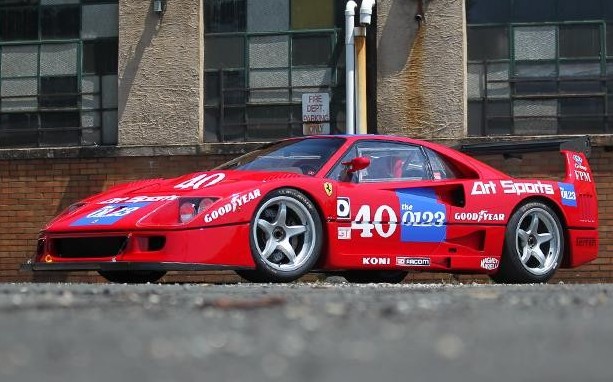 The Ferrari F40, while not the first “supercar,” can safely be considered the first “modern supercar” – outrageous styling and outrageous performance with exclusivity to top it all off. The F40 threw the gates open for the decades of ridiculous cars that followed it.

But unlike many of the supercars after it, this one went racing. Ferrari is first and foremost a race car builder (or so they’d like you to believe). Even Ferrari hasn’t sent their halo car into competition since. Based on the road car, this racer has much of the same styling, although with more lightweight body panels. Under the rear engine cover is a 760 horsepower 3.0-liter twin-turbocharged V-8.

Ecurie Pozzi was a race team that had campaigned Ferraris for many years. They saw the potential of the F40 and, in conjunction with Ferrari and Michelotto, the F40 LM was born. Ecurie Pozzi received two of the 18 LMs built and theirs were the only ones that ever saw sanctioned racing. This is the second of the two.

The competition history of this car is as follows:

And that was it for the F40 LM. This car remained in the Charles Pozzi collection until 2000. It has spent the last few years in a New York collection and has remained in race-ready condition in its original 1990 livery. There were other F40 race cars built for customers back in the day, but this is one of only two Ferrari-backed Michelotto F40 LMs that ever raced and it’s the only one in private ownership. Get it now for a cool $2,000,000-$2,500,000. Click here for more info and here for the rest of Gooding’s Pebble Beach lineup.