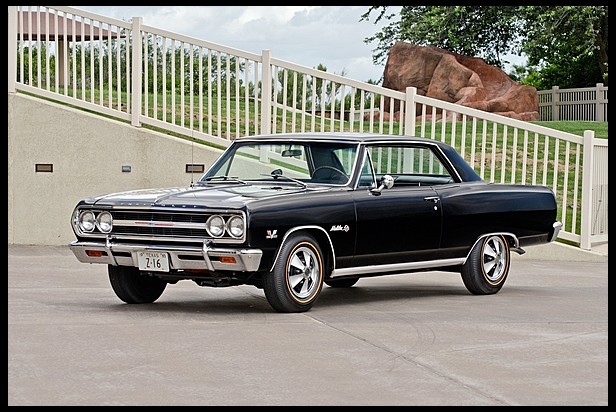 The Chevrolet Chevelle was introduced in 1964 to go head-to-head with Ford’s Fairlane. But the muscle car era inadvertently got in the way and the Chevelle became on of the most sought-after muscle cars of the era and the Fairlane disappeared into history.

While Pontiac and Oldsmobile had muscle car offerings in 1964, Chevrolet was sort of left behind. But they changed that in 1965 when they took the Chevelle and added $1,501 worth of goodies to it and called it the “Z16” (it was an optional performance package). What did that package include? How about the Corvette’s 396/425 V-8 (that’s 6.5 liters for those of you playing at home). But because the Corvette was the revered “top dog” – they had to under rate the Chevelle’s horsepower to 375.

They also gave it bigger brakes, an upgraded suspension, and better steering. It was basically an SS 396 on steroids. Chevy only built 201 of them and this is one of three factory black/black cars. The value of these cars has definitely been on the rise – you’re looking at about $150,000 for this car. Check out more info here and more from Mecum here.