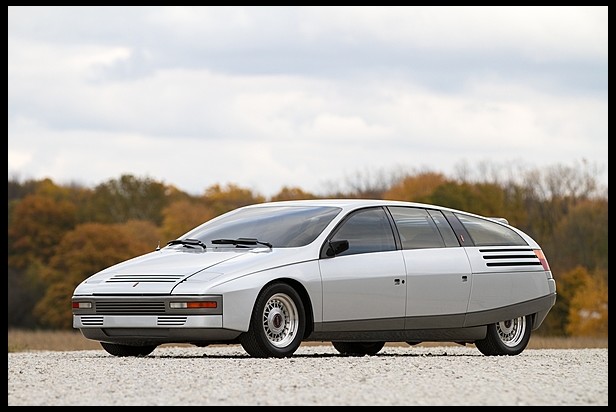 So what in the world do we have here? Actually, this car has shown up on this site before – it was sold at Auctions America’s 2013 Auburn Spring auction earlier this year, where it brought $9,570. And it’s set to cross the block again.

The Quicksilver was actually built by Ghia in Turin at Ford’s request. Ford debuted the futuristic (minivan? crossover? wagon?) at the 1983 Geneva Auto Show. The car was a hit and Ford toured the thing all over the world, hitting auto shows until 1986.

The car sits on a stretched version of an AC 3000 ME (a very rare British sports car from the era) chassis and uses a mid-mounted 2.8-liter V-6. It seats five and is fully functional, albeit not road-legal. It would be a most-amusing car to own and weird out everyone in town. Absolutely no one would be able to guess what it is. And it can be yours for somewhere in the neighborhood of ten grand. Click here for more info and here for more from Mecum’s sale.