This is a car with quite a few names. I’ll start at the beginning, and you can draw your own conclusions as to what it should be called (I just went with what the dealership selling the car calls it). The Ghia and Chrysler connection of the 1950s is well documented. Chrysler spent a lot of money designing fanciful show cars in the ’50s, with styling done by Ghia (well, styling by Exner, execution by Ghia).

Ghia showed a prototype dubbed “Gilda” in 1955. Then there was Dart concept was styled by Exner in 1956, and a second version called the Diablo also appeared in ’56. Then, in 1957, Ghia showed another evolution, called the Superdart. It was reportedly created for Chrysler, but there doesn’t appear to be any Chrysler badging on this car.

Power is from a 400 horsepower Hemi V8, and the car rides on a Chrysler 300C chassis. It debuted at the 1957 Turin Motor Show and later ended up in the U.S., where it was purchased by Dual Motors, who showed the car as a Dual-Ghia prototype. Most of the internet seems to just call this car a 1958 Dual-Ghia Prototype. Which is what it was last shown as. But it’s not what it was called originally.

A private owner purchased it shortly after Dual-Ghia’s 1958 New York show appearance and actually put nearly 40,000 miles on it over nearly two decades. It’s said to be original and unrestored. Be it a Chrysler, a Ghia, or a Dual-Ghia, it remains as a fantastic piece of ’50s styling excellence. It’s for sale in Connecticut with no price listed. Click here for more info.

Here’s another classic Dodge concept car from the mid-1950s. This was the final car in the Firearrow series. To recap, the first Firearrow was a mockup, the second was a beautiful convertible, the third was a coupe, and this, the fourth, was a production-ready car that Chrysler decided not to move forward with.

It’s powered by a 150 horsepower, 3.9-liter Red Ram Hemi V8. Like the Firearrow II, it was styled by Virgil Exner and produced in Turin by Ghia. It has a black-and-white checkered interior, which is fantastic. Imagine if Dodge had actually built this and given themselves a legitimate, stylish Thunderbird and Corvette fighter.

This car has changed hands before (it sold for $1.1 million at Barrett-Jackson in 2007) and has been in the Blackhawk Collection for years. And now Mecum appears to be offering it on their behalf. Click here for more info.

Dodge debuted a series of Firearrow concept cars in the 1950s that showcased their Hemi V8s and their relationship with Ghia in Italy. Only two of the four Firearrow cars were convertibles, including this one.

It’s powered by a 150 horsepower 3.9-liter Red Ram Hemi V8. Not the most powerful thing in the world, but proof that Dodge was trying to move into a more performance-oriented territory.

Styling is by Virgil Exner, and the body was built in Turin by Ghia. The car was shown all over the U.S. in 1954, and it marked the first running, driving Firearrow, as this car’s predecessor was just a static model. This Jet Age concept car is fully usable, and it is for sale by Mecum/the Blackhawk Collection. Click here for more info.

Does this look like a Dual-Ghia to you? Well if it does, that’s because it essentially is. Chrysler had a relationship with Ghia during the 1950s that led to some fantastic concept cars, including this. But Chrysler passed on putting this one into production.

So in stepped Gene Casaroll, a Detroit-area businessman, who arranged to put it into production as the Dual-Ghia. The Firebomb remained a one-off Chrysler concept powered by a 270 horsepower, 5.1-liter V8. This car is also the reason some people refer to the Dual-Ghia as the “Dual-Ghia Firebomb,” which is not accurate.

The car has been hanging around the Blackhawk Collection for years and is now offered for sale as part of Mecum’s “Gallery,” alongside quite a few other Blackhawk cars. You can see more about it here.

Sometimes design houses will build concept cars on behalf of a manufacturer. ItalDesign used to do it, along with Pininfarina and even Zagato, as was the case here. It was built in conjunction with Lamborghini and was ultimately intended to slot in Lambo’s model lineup below the Diablo.

Only one functional prototype was built (this car), and it borrows the Diablo VT‘s chassis and all-wheel-drive system. Power is from a 5.7-liter V12, and the car weighed significantly less than the one it was based on, thanks to carbon-fiber bodywork and a lack of doors. That’s right, the entire front section, windshield included, flips forward to allow entrance to the two-seat cabin.

It debuted at the 1996 Geneva Motor Show and was acquired by its current owner in 2000. The car was last shown and driven in 2008. You can see more about it here, and see more from RM here.

This Rover concept car was a little ahead of its time. Where it to be introduced today, they would sell quite a lot of them. It’s basically a Rover Metro five-door hatchback with some lower body cladding, headlight guards, roof rails, and sporty graphics. In today’s word, that means it is a crossover. It’s off-road-ready!*

Power is from a 1.4-liter inline-four. The Scout was one of six “lifestyle” concepts based on the Metro that were built around this time. Land Rover would ultimately enter the space that this was intended to fill with the Rover 200-based Freelander.

This car has covered just over 1,000 miles since new and is coming from a private collection without a pre-sale estimate or a reserve. Click here for more info and here for more from this sale. 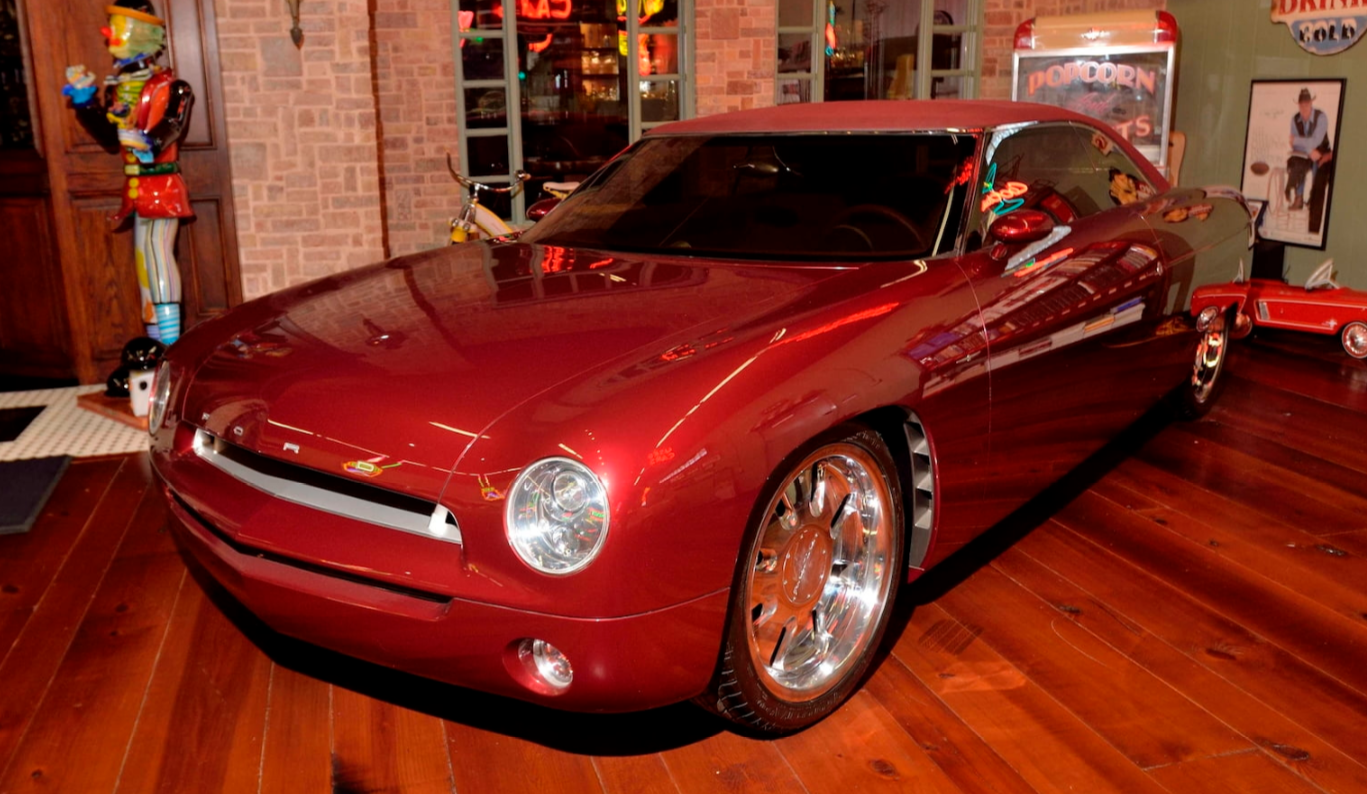 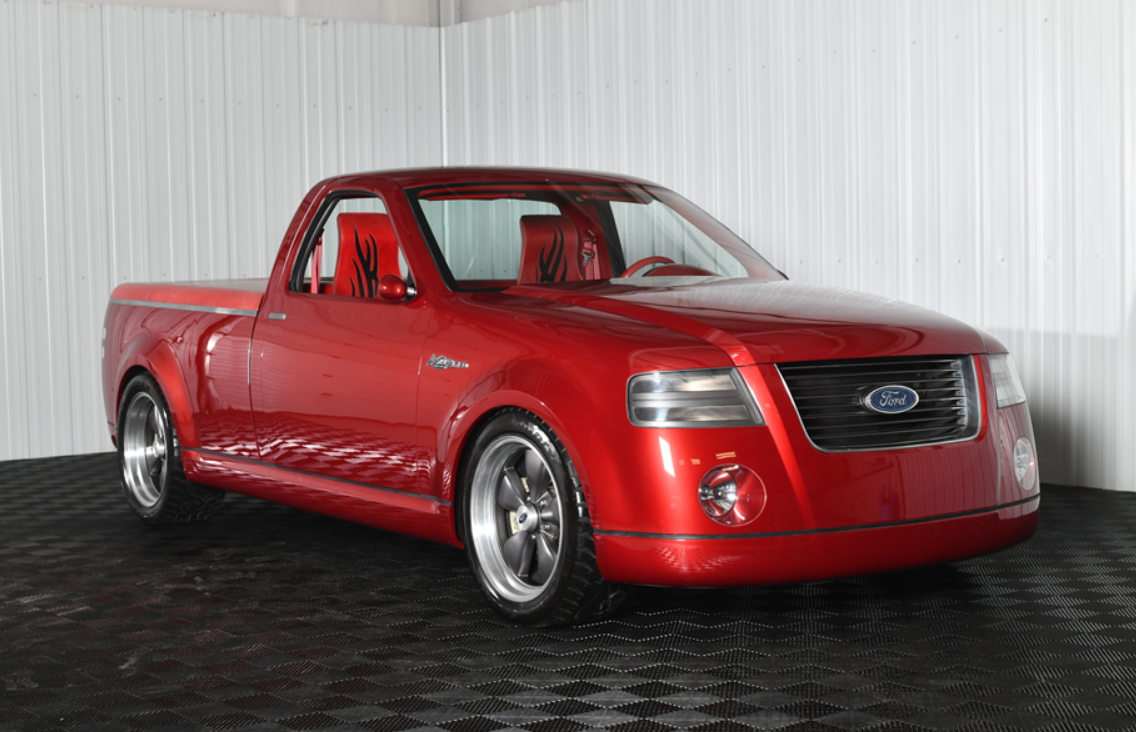 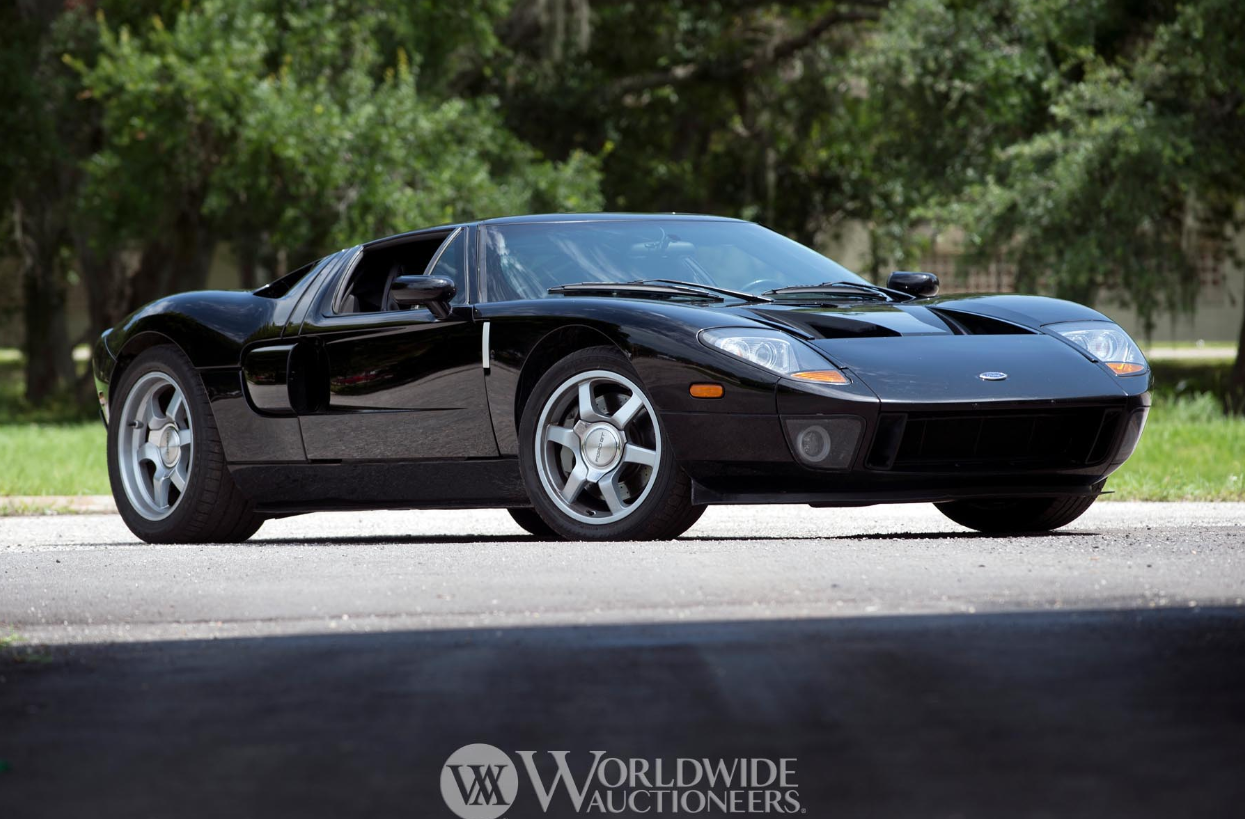 We’ve featured prototypes of the original Ford GT40, but here’s one of what we’ll call the “second coming” of the GT. The original concept car for this model debuted in 2002 and it’s thought that Ford built nine “confirmation prototypes” of which this is CP4, or vehicle #00007. Its purpose was to be the test bed for ride, steering, handling, and climate control systems.

All black, it was the first GT to hit 200 mph. It’s powered by a 5.4-liter supercharged V-8 making 550 horsepower. It joined the collection it is being sold from in 2012 and it is street legal. It’s the only “CP car” from the GT program that is road-registered and not governed to 15 mph. It’s thought that only four GT prototypes remain and this one is selling at no reserve. Click here for more info. 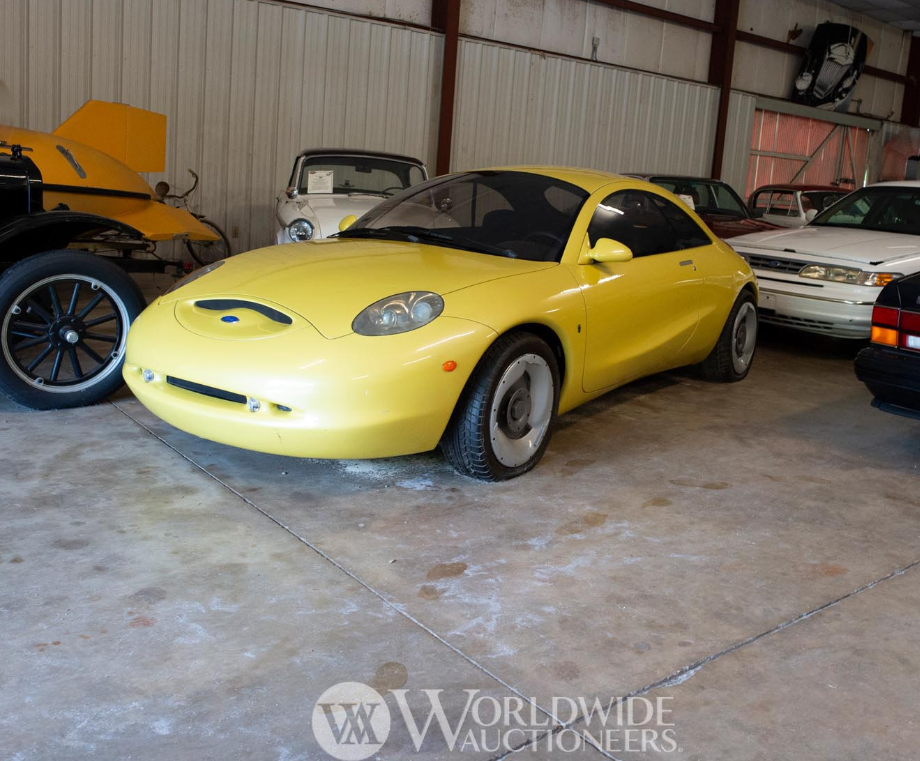 Well here’s a weird one. It looks like the love child of a Ford Ka and a last-gen Mercury Cougar (it’s actually based on a Mondeo platform aka the Ford Contour). It’s honestly pretty crazy this car still exists at all. It’s just a rolling concept car – there’s no engine, no interior. It’s just a two-door coupe body with some wheels on a chassis.

Ford and Ghia teamed up for two concept cars in 1997 just to explore new shapes and using aluminium space-frame construction. The body is fiberglass, the wheels don’t steer, and the doors don’t even open. It’s like having a rolling brick. Not much to do with it other than look at it. But hey, at the same time, you’re going to be the only person who has one. Click here for more info. 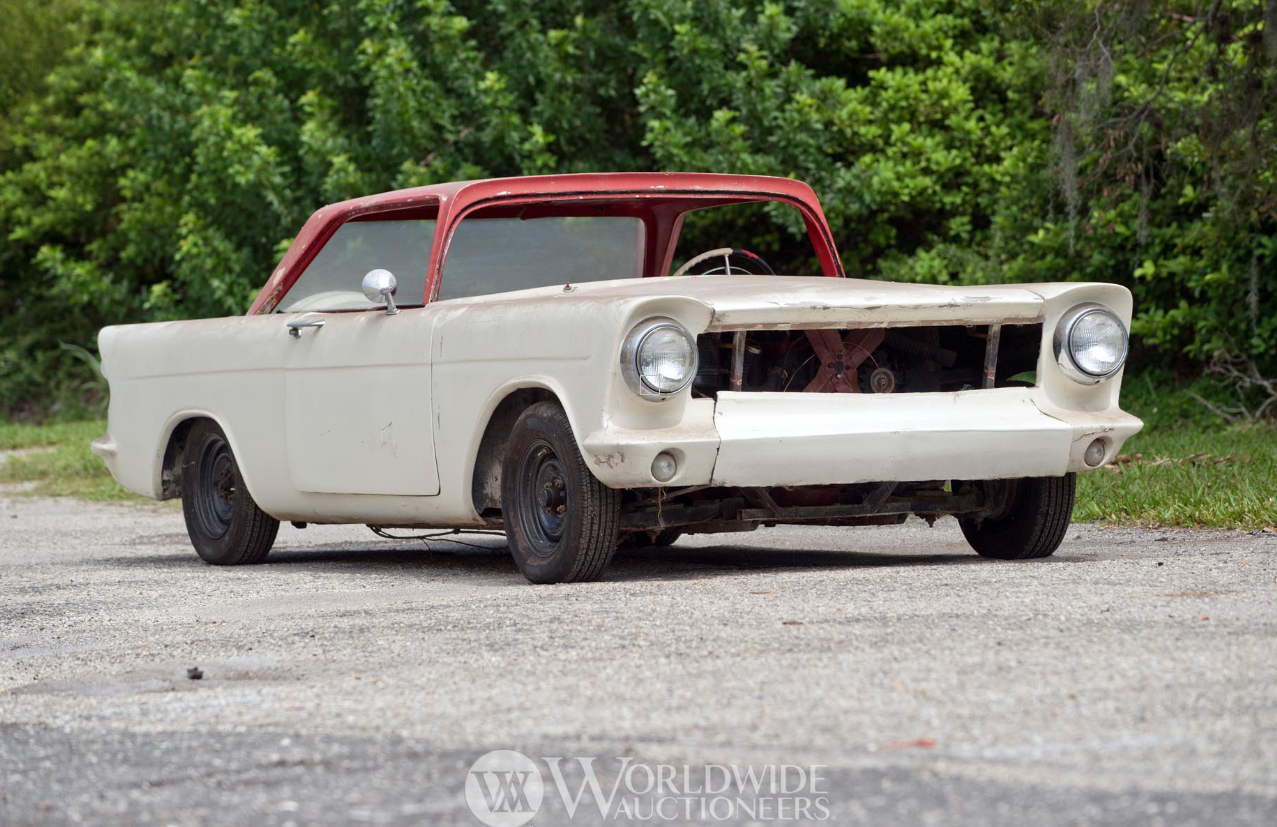 In 1960, the Seagrave Fire Apparatus, the longest-running producer of fire apparatus in the United States dating back to 1881, decided they wanted to build passenger cars. But not just normal American passenger cars, but economy cars. This in 1960, when American automobiles were perhaps approaching their largest.

This two-door hardtop is much smaller than the photo above makes it look and it weighed in at only 1,700 pounds. Seagrave managed to build three prototypes (two in fiberglass, one in aluminium), and this fiberglass example was powered by a 2.7-liter Continental straight-four engine capable of 65 horsepower. It was pulled out of a barn in Michigan in 2013 and is restoration ready. It’s one of the most interesting cars for sale in Auburn this year. Click here for more info and here for more from this sale.