Tempo-Werke (officially Vidal & Sohn Tempo-Werke GmbH) was a Hamburg-based company that got their start in 1924. The company was purchased by Daimler-Benz in 1971, and the marque was phased out after 1977.

The Viking was introduced in 1950 to replace previous three-wheeled light trucks. A pickup and van were offered, with power from a 452cc two-stroke twin making about 20 horsepower. They featured a front-engine, front-wheel-drive layout. Top speed was about 40 mph.

This passenger van variant has three rows of seats and has been restored to a condition probably better than when it was new. This Viking is estimated at $19,000-$27,000. Click here for more info.

VEB Barkas-Werke was an East German manufacturer of vans that existed from 1958 until 1991. And they made essentially one product during that time: the B 1000 (they also produced engines for Trabant). In over 30 years, they somehow managed to only make about 176,000 of these.

But they are kind of iconic in that the front-engine, front-wheel drive van is the vehicle of choice for baddies on the “wrong side” of the Berlin Wall. The engine is a 1.0-liter two-stroke inline-three that made about 41 horsepower.

An unlikely full-restoration candidate, this van has had just such a thing. It carries an estimate of $15,000-$23,000. Good luck finding a better one. Click here for more info.

About 2,000 Transporter models were built by Goggomobil, or Glas, the company that produced the Goggomobil. These were built at the request of the German postal service, and they very much do like look a mail van.

Different levels were offered. We’ve featured a TL-250 Transporter and a TL-400. This is an early model and is a TL-300, meaning it is powered by a 298cc two-stroke inline-twin. Output was rated at 15 horsepower.

Russ Snowberger competed in 15 Indianapolis 500s as a driver between 1928 and 1947 with one pole position and a best finish of fifth (two years in a row). He was the king of the “junk formula” that debuted in the 1930s that required stock-ish engine blocks.

He built and entered some of his own cars, including this Hupmobile-powered roadster. After his career as a driver ended, he became the chief mechanic for the Federal Engineering racing team based in Detroit. This lasted until 1961 and included prepping this Federal Engineering Detroit Special in 1956.

The chassis is based on a Kurtis 500C, and it’s powered by a 4.2-liter Offenhauser inline-four. No specific competition history is listed, but it was driven in period by Tony Bettenhausen, George Amick, Billy Garrett, and Tom Pistone. It’s currently owned by Ray Evernham, who is thinning his collection a bit at Mecum in Indy. Click here for more info.

COEs were seemingly everywhere even 30 years ago. Now seeing one on the road is kind of a treat, but in the 1970s they were much more commonplace. The cab-over-engine design is still popular in Europe, but different laws in the U.S. make them less appealing today than they were 40 or 50 years ago.

Something I find interesting about older semis is that it can be hard to pin down a year (or range of years) of manufacture. Trucks were generally in use until they were no longer functional. So some of the trucks you saw on the highway in the 1990s may very well have been produced in the 1970s, ’60s, or even earlier.

Diamond T is perhaps best well-known for its beautiful Art Deco pickup trucks of the 1930s and ’40s. But they were also building heavier trucks for commercial and military use. This 1956 COE model is said to have a “262 engine,” which I think means a 12.2-liter Cummins turbodiesel.

It’s one of the tallest COEs of its day and is well restored. It’s being sold on behalf of the American Truck Historical Society. You can read more about it here and see more from Mecum here.

The 1950s was the golden era of fiberglass. And Jim Byers took full advantage of it in El Segundo, California, in 1955 when he designed the SR-100. This body was constructed of fiberglass and was meant to fit over a 100-inch wheelbase. He sold the molds to Victress in 1960.

Approximately 25 bodies were produced in that time, and only 10 are known to still exist. This one is fitted on a modified 1949 Ford chassis and features independent suspension. Power is from a 4.3-liter Chevrolet V8 that is mounted behind the front suspension, which technically, I guess, makes this car mid-engined.

The 502 was also better appointed than the 501, which made it expensive. They only sold 190 in the first sales year. The standard body style was a sedan, but Baur-built coupes and cabriolets were also available. This car is one of 57 cabriolet examples.

This one is powered by a 3.2-liter V8 sourced from a later BMW 3200L. The 502 was Germany’s first post-war V8-powered car. With a single carburetor, this engine was rated at 140 horsepower when new. The removed factory 2.6-liter V8 is included with the car.

This car was restored between 2011 and 2013, and it looks pretty fantastic. It’s been at Pebble Beach and is being offered out of a museum. The bidding is already at $125,000 as of this writing, and it is scheduled to end two days from this posting. Click here for more info.

A few weeks ago we featured a Nash Metropolitan, which is what this car is usually referred to as. But, it was actually built under four different brands including Nash, Hudson, Metropolitan, and Austin. The easy way to identify an Austin is the right-hand-drive layout.

Actually, Austin built them all and then shipped most of them to the States for sale by Nash/Hudson/AMC. Metropolitans aren’t uncommon in the US (I love them), but the Austin version sure is. This one is still in England though.

Power is from a 1.5-liter inline-four (sourced from the Austin A50 Cambridge) that made about 68 horsepower. While the Metropolitan launched in the US in 1953, they didn’t go on sale in the UK until the very end of 1956, making this a very early UK model. Austin-branded production continued through 1959. There were no ’60 models in the UK, and 1961 cars were just known as “Metropolitans” as they were in the US. Both coupes and convertibles were available.

Frank Kurtis built quite a few race cars in his day, but he only built one 500E. In fact, he only built three cars in 1956 in total, two of which were Novi-powered 500Fs. The E was produced for the Federal Engineering race team, and it was an evolution of the earlier 500D, except the engine was tilted to the left and the fuel cap shifted places on the tail.

The engine would’ve been an Offenhauser inline-four. The car currently houses a mock-up of an Offy, but it’s not actually powered. The competition history for this chassis includes:

Yeah, it was raced at Indy, a lot. It was supposed to go back in ’64, but they never ended up preparing it. The car’s trail went cold, until John Snowberger, went on the hunt for his dad’s old race cars (his father, Russ, was Federal Engineering’s crew chief for many of those Indy appearances). He found a rusty old frame in a Detroit-area shop, which later turned out to be the remains of the 500E. It has been semi-restored, and is now expected to bring between $90,000-$120,000. Click here for more info and here for more from this sale.

Rambler is one of the most confusing American automotive marques. The first Ramblers were produced in 1900. They would become a product of the Jeffrey company in 1914, and Jeffrey became Nash during WWI.

Nash would later produce Rambler-branded cars, up until 1958, when Rambler became its own marque again (before once more becoming a model under the AMC brand). The 1956 Rambler was completely redesigned, and some seem to think it was its own marque beginning in 1956. The ’56 and ’57 Ramblers were pretty cool looking, especially in wagon form as shown here.

Power is from a 3.2-liter inline-six that was factory rated at 130 horsepower. Production totals are hard to come by for the $2,326-when-new Cross Country wagon, as the totals are combined with the mid-level Rambler Super Station Wagon. Between the two models, 21,554 were built. Turquoise is one of the best 50s colors, making this wagon a winner. Click here for more info and here for more from this sale. 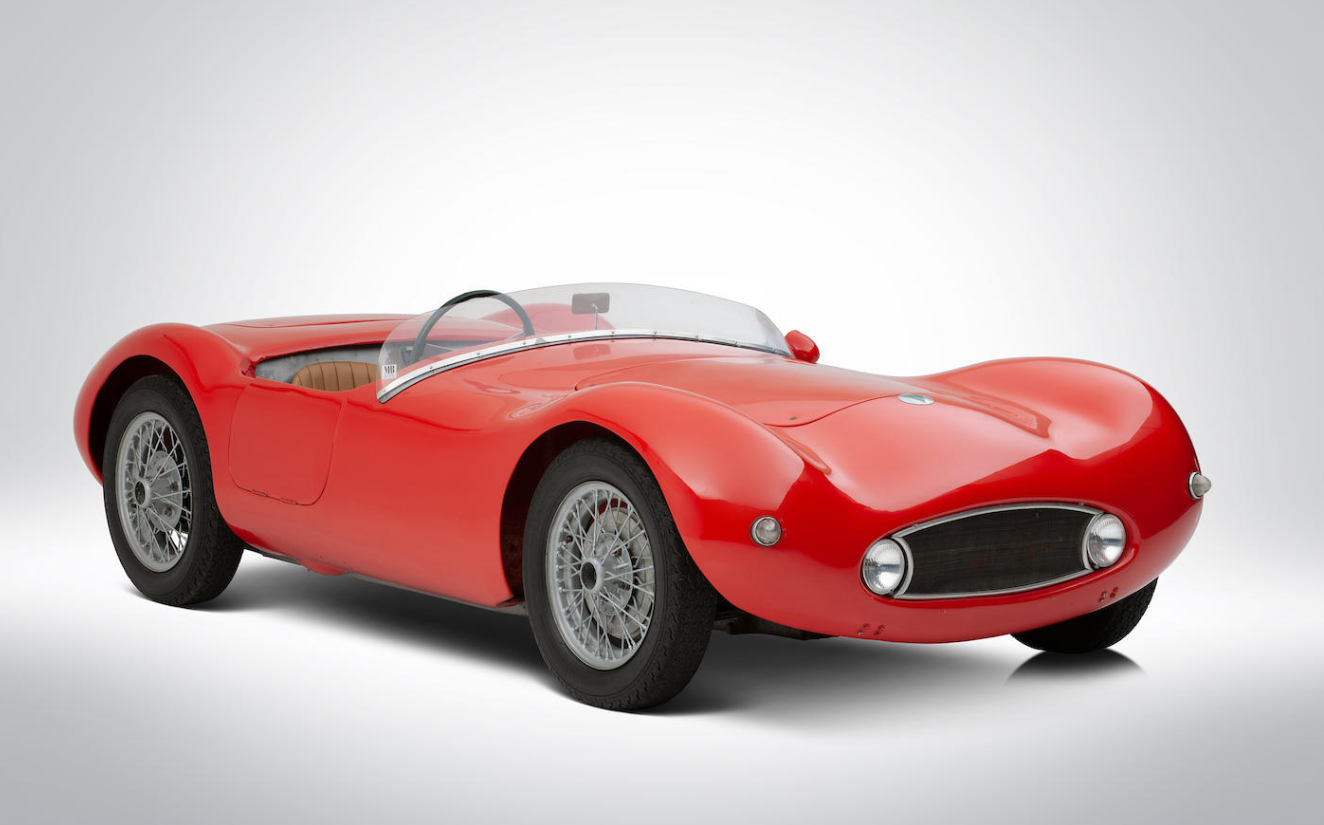