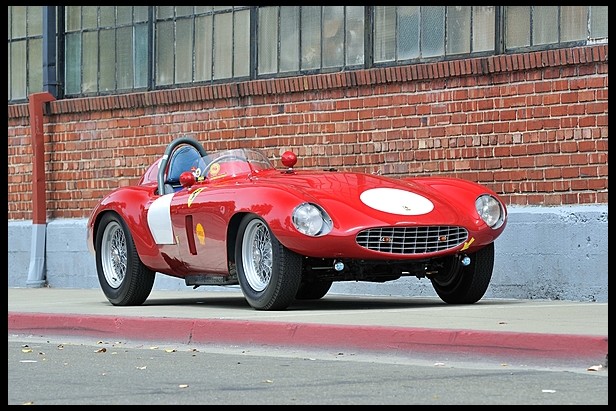 Ferrari has always been a company focused on racing. The saying has always been “they build road cars so they can afford to go racing.” And it’s true. While, this is a race car, it was successful because of earlier race cars.

To wit: the engine. Alberto Ascari’s second Formula One championship was at the helm of a Lampredi straight-four-powered car. Because this engine was so successful in F1, Ferrari decided to install it in their sports racing cars, beginning in 1953. The 750 Monza (which used a 250 horsepower 3.0-liter variant of the engine) was the fourth iteration of what is now referred to as the “Monza” line of sports cars. It was built for 1954 only.

This car has known ownership history from new and was driven by Mike Hawthorn at Goodwood during its first racing season. It was then acquired by Jaguar and used for testing purposes (for comparisons to the D-Type). They sold it to one of their drivers (1951 Le Mans-winner Peter Whitehead) who sold it to Jack Brabham, who took it to Australia and hired drivers to race it in the 1955 season down under.

It entered its first historic race in 1987 and has been used and cared for since. It has been restored at some point and is a driveable and raceable race car. It is among the first of the 35 750 Monzas built and should bring about $2.5 million at auction. Click here for more info and here for the rest of Mecum’s Monterey lineup.