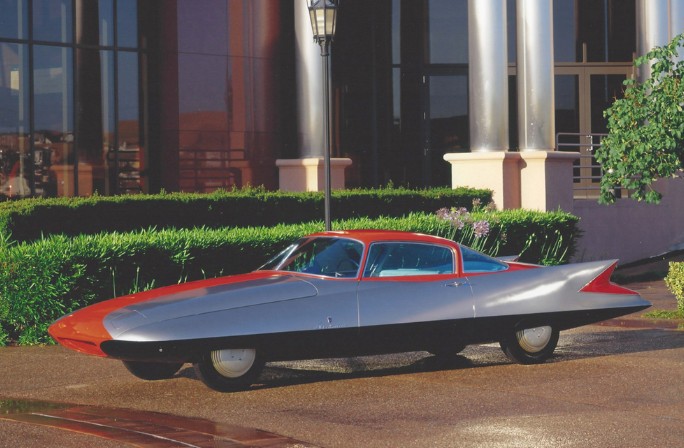 We generally don’t feature cars on Saturdays, but I’m making an exception here for two reasons: 1. the ownership history of this car tells me it is unlikely to come up for sale again anytime soon (if it sells) and 2. I just turned on Barrett-Jackson on Velocity for coverage of Friday’s sale (as I watch RM Sotheby’s on my laptop) and I happened to look at their catalog (which I was doing almost daily for about a month) and I found this car. It wasn’t in their catalog when I finalized the cars we were going to feature from Arizona’s sales but appeared as a late-add by Barrett-Jackson (or, at least, not a timely addition).

Anyway, we’re here, so let’s talk about what this is. Built at the the request of Chrysler chief Virgil Exner, this Ghia-bodied streamliner is the perfect Jet Age concept car. Why? Well it’s powered by a turbine for starters. It only puts out 70 horsepower (and idles at a bat shit crazy 54,000 rpm), but in the world of turbines and sleek aerodynamics, it was theoretically enough power to push this thing to 140-160 mph. The only cars doing that kind of speed in 1955 were doing it on the Mulsanne Straight at Le Mans.

It debuted at the 1955 Turin Auto Show and was dubbed “Gilda.” The interior (and the engine compartment) are wild and hearken back to an era when people dreamed of the “car of tomorrow.” Ghia eventually put it on display at the Henry Ford Museum where it stayed until 1969 when it was acquired by Bill Harrah. The Blackhwak Museum got it when that collection was dispersed and the current owner bought it in 2005. It’s been to Pebble Beach, Ville d’Este, and was even a no-sale at a Gooding auction years back.

Now Barrett-Jackson is featuring it as the wildest car in their lineup this year (well that, and this). Anyway, I’m writing this late on a Friday night for a Saturday morning post because it was starting to make me sick to my stomach that I was potentially missing out on featuring a car I’d never see offered for public sale again – it has, after all, spent most of its life in museums. Click here for more info. Price? Well the Blackhawk was offering it for $125,000 in 2001 and it no-sold at Gooding with an estimate of $1.0-1.3 million. Expect the owner to want more than that at Barrett-Jackson later today.