Grid Motor Racing of Leamington, England, went Group C racing with this Porsche-powered prototype in the early 1980s. Grid stood for Giuseppe Rise and Ian Dawson, the two men behind the project, and they built two sports racing prototypes, with this being the second.

This car is powered by a twin-turbocharged 3.2-liter Porsche flat-six good for 500 horsepower, and the body is made of glass-reinforced plastic. It’s hung over a monocoque featuring aluminum honeycomb panels. Though listed as a 1983, the car made its racing debut in 1984, and it’s competition history includes:

It was dead last at Le Mans, having covered just 10 laps. Fortunately, that’s enough to grant you access to nearly any historic event you want to participate in. And it did have more successful outings later that season.

The current owner bought it in 2012 and listed it on Bring a Trailer late last year where it was bid to $200,000. Seemed like a good price, but they seem to think that can get $275,000-$325,000 at Bonhams. It will be interesting to see what the result ends up being. Click here for more info and here for more from this sale.

For Sale at Girardo & Co

The World Sportscar Championship produced some pretty awesome race cars in the 1980s, including this, the Lancia LC2. Group C was where all the big dogs played during this era. The LC2 was Lancia’s factory-backed entry between 1983 and 1986.

The fun part about this car is that it is actually Ferrari-powered. It’s got a twin-turbocharged 3.0-liter V8 that can be boosted to over 800 horsepower. Group C cars are not for the faint of heart. Only seven LC2s were built, six of which wore a factory Martini livery like this one. The competition history for this chassis, which was the first one built, includes:

This is the LC2 that later spent time in the Blackhawk Museum. It’s now available by Girardo & Co. with a price available upon request. You can read more about it here.

The Bristol Type 603 was introduced in 1976 as one of the replacements for the 411. It was a pretty big step, style-wise, for little Bristol, especially considering how their designs had evolved up to that point. The third series of the 603 was called the Britannia, and an upgraded version of that car was sold simultaneously as the Brigand.

The Brigand name was lifted from a Bristol ground attack plane from the 1940s, which is pretty cool. In car form, it was powered by a turbocharged 5.9-liter Chrysler V8. That turbo, and its associated hood bulge, is what set it apart from the Britannia. Top speed was 150 mph.

By the time this car was built, Bristol had ceased publishing production figures, so the true number of Brigand examples built is unknown. It was available from 1982 through 1994, and for a long period of that time, they sold approximately three of these. Per year. So yeah, they’re rare. Still, this car is estimated at $29,000-$34,000. Click here for more info and here for more from this sale.

The C3 was a lighter version of the 126 C2B and used a carbon/kevlar shell. A 600-horsepower turbocharged 1.5-liter V6 provided the power. The car debuted halfway through the season, and four chassis were built. The competition history for this car includes:

The car fell back into reserve car status and was sold at the end of the season to the French Ferrari importer. But this car helped Ferrari win the constructor’s title for the 1983 season. It should now bring between $666,600-$1,111,000. Click here for more info and here for more from this sale.

Up until sometime in the 1990s, car companies would produce all sorts of body style variations of their cars. This was especially popular in Europe, where sedans could also be had in wagon, van, and even pickup forms. They would all wear the same model nameplate.

The Morris Ital was only built by British Leyland between 1980 and 1984. It was available as… well, a sedan, wagon, van, and pickup. This example is powered by a 1.3-liter inline-four good for 61 horsepower.

But what draws us to this example is the sheer rarity of it. The Ital was the final model to wear the Morris badge and only 37 are still registered in Britain, with another 145 or so extant but not roadworthy. Only six of that combined number are said to be pickups. And this one looks great. It should sell for between $3,800-$5,000. Click here for more info and here for more from Brightwells. 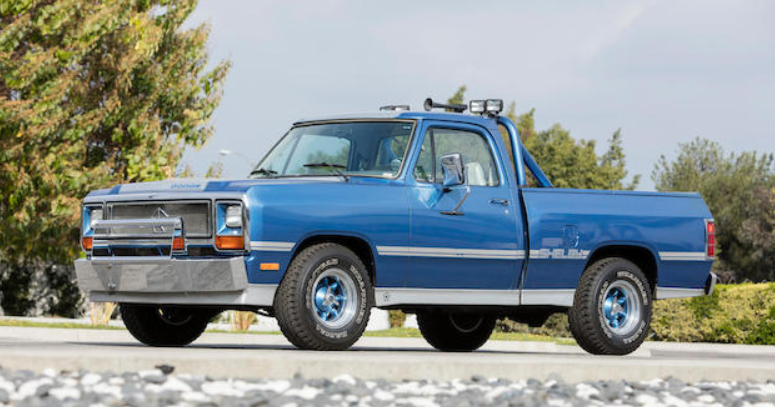