The Diamond T 201 is probably the most beautiful Art Deco pickup truck ever built and is definitely the best-looking pre-war pickup. But doesn’t it look pretty beefy for a pickup? It looks much more heavy-duty than it’s GM or Ford counterparts.

The Diamond T Motor Car Company was founded in Chicago in 1905 by C.A. Tilt. They were always a truck company, even though they dabbled in SUVs for a hot second. In 1958, they were acquired by White, who merged them with Reo in 1967 to form Diamond Reo, which stopped manufacturing trucks in 2010.

The 201 went on sale in 1938 and was a 1-ton truck, the equivalent of a Chevrolet 3800. Production continued through 1949, and when it went out of production, Diamond T turned to heavy trucks only (though there were some half-ton models offered through 1951. Power is from a 3.9-liter Hercules inline-six rated at 91 horsepower.

This one has been restored and features a polished oak bed floor. It’s a beautiful truck with a dashboard worthy of the finest luxury cars of the day. Who said luxury pickups were a new thing? Click here for more info and here for more from this sale.

The classic Mini has been sold under a variety of marques, including Austin, Morris, Innocenti, Authi, Leyland, Rover, and of course, Mini (to say nothing of its Wolsely and Riley cousins). Mini, as a marque, began in 1969, replacing the Austin and Morris brands.

The pickup truck body style was offered between 1961 and 1983. This one is powered by a 1,275cc inline-four. I like the bed cover – as if there is sufficient cargo beneath that needs protection.

There were 58,179 pickup variants built, and this one has been restored. They aren’t nearly as common as the coupes and are rarely seen at auction. This one carries an estimate of $20,000-$27,000. Click here for more info and here for more from this sale.

The Fordson tractor brand was manufactured by various entities of the Ford Motor Company between 1917 and 1964. It was under Ford of Britain’s purview for the last few decades, and in that time, they built a 1/2-ton commercial vehicle called the E83W. It was available as a delivery van, a pickup, and other light-duty body styles.

The truck was available from 1938 through 1957 in the U.K. and was also offered under the Thames commercial brand. It retained its pre-war styling and 10 horsepower, 1.2-liter inline-four for the duration of production. Top speed was about 40 mph.

This tiny pickup has been restored and is now offered with a pre-sale estimate of $9,000-$12,000. Click here for more info and here for more from this sale.

Bedford wasn’t founded until 1931. And it only exists because GM needed a local brand for their commercial vehicles and light trucks. They were previously sold as Chevrolets, but after GM purchased Vauxhall in 1925, they introduced Bedford as a division of Vauxhall for the U.K.

The BYC was introduced in 1935 after the company changed the name of the earlier VYC model, which was a 12 cwt light delivery vehicle that debuted in 1932. The engine in this truck is a 3.2-liter inline-six.

This is a pretty rare truck today, as the model didn’t survive the war. It was restored 10 years ago and has spent time in New Zealand. It should now sell for between $10,000-$15,000. Click here for more info and here for more from this sale.

Up until sometime in the 1990s, car companies would produce all sorts of body style variations of their cars. This was especially popular in Europe, where sedans could also be had in wagon, van, and even pickup forms. They would all wear the same model nameplate.

The Morris Ital was only built by British Leyland between 1980 and 1984. It was available as… well, a sedan, wagon, van, and pickup. This example is powered by a 1.3-liter inline-four good for 61 horsepower.

But what draws us to this example is the sheer rarity of it. The Ital was the final model to wear the Morris badge and only 37 are still registered in Britain, with another 145 or so extant but not roadworthy. Only six of that combined number are said to be pickups. And this one looks great. It should sell for between $3,800-$5,000. Click here for more info and here for more from Brightwells. 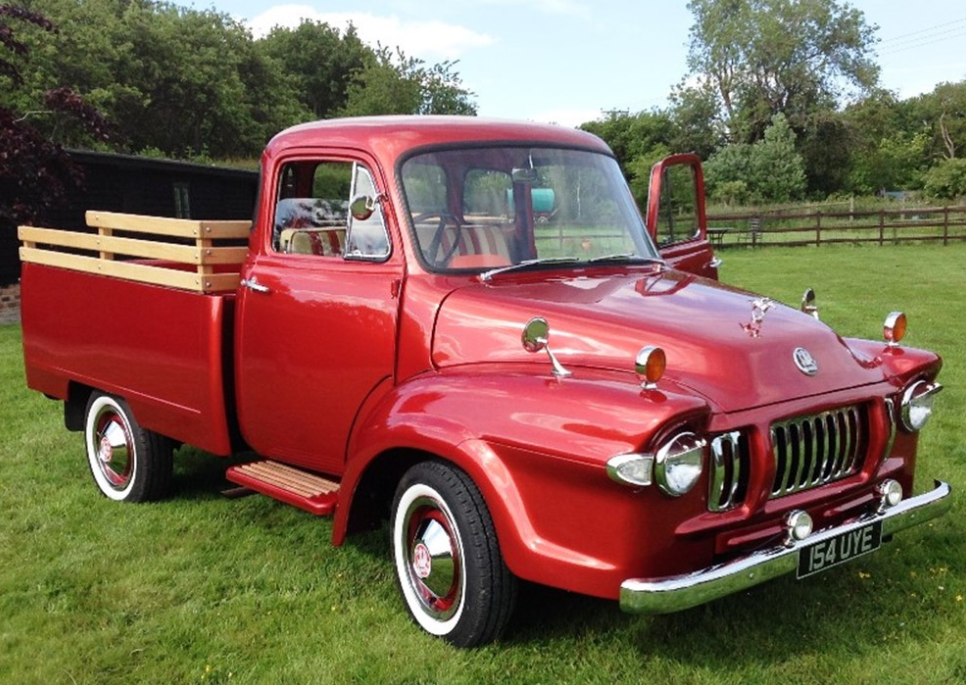 Bedford was, from its inception, a division of General Motors. The commercial companion to Vauxhall, Bedford’s light commercial vehicles were available from 1930 through 1991.

The Bedford TJ was a model sold as both a van and pickup truck from 1958 through 1967 (and through 1975 in other markets around the world). It was an updated version of the earlier TD. The JO (or J0), which was the ½-ton model, was the lightest of seven different TJs offered.

Based on the lot description, it appears this truck uses a 2.6-liter straight-six. The styling on this thing is kind of wild, with a lot going on up front and a very plan looking box out back. It’s like the automotive equivalent of the reverse mullet. About 5,000 JOs were manufactured and only 20 are known to exist in the U.K. This one has been restored to what appears to be better-than-new condition. It was the 10th JO built and should bring between $60,000-$65,000. Click here for more info and here for more from this sale. 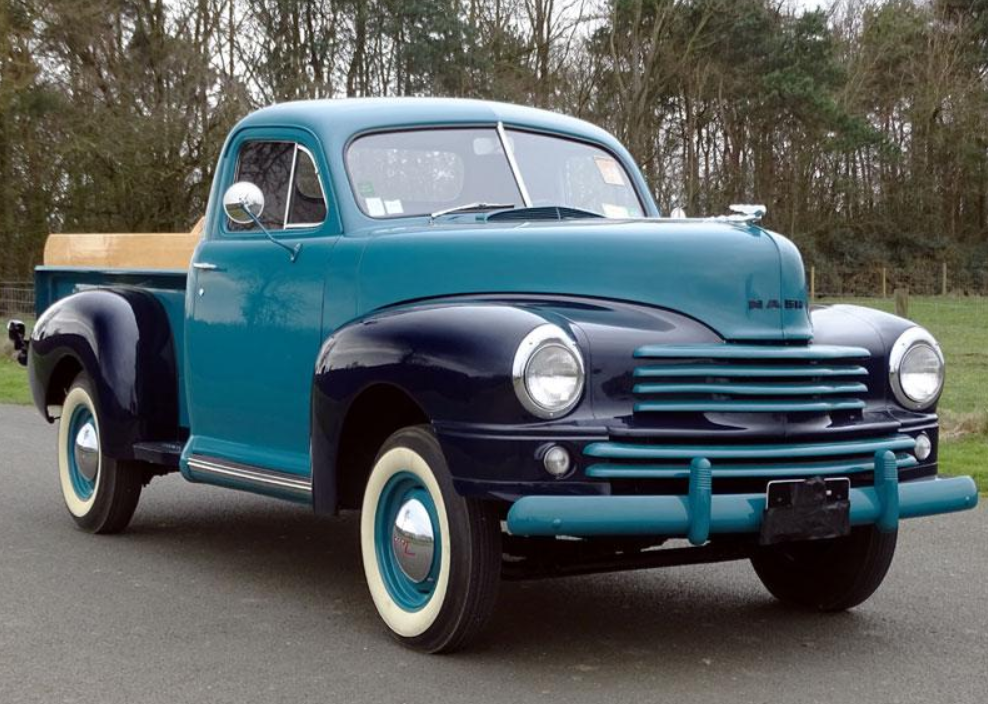 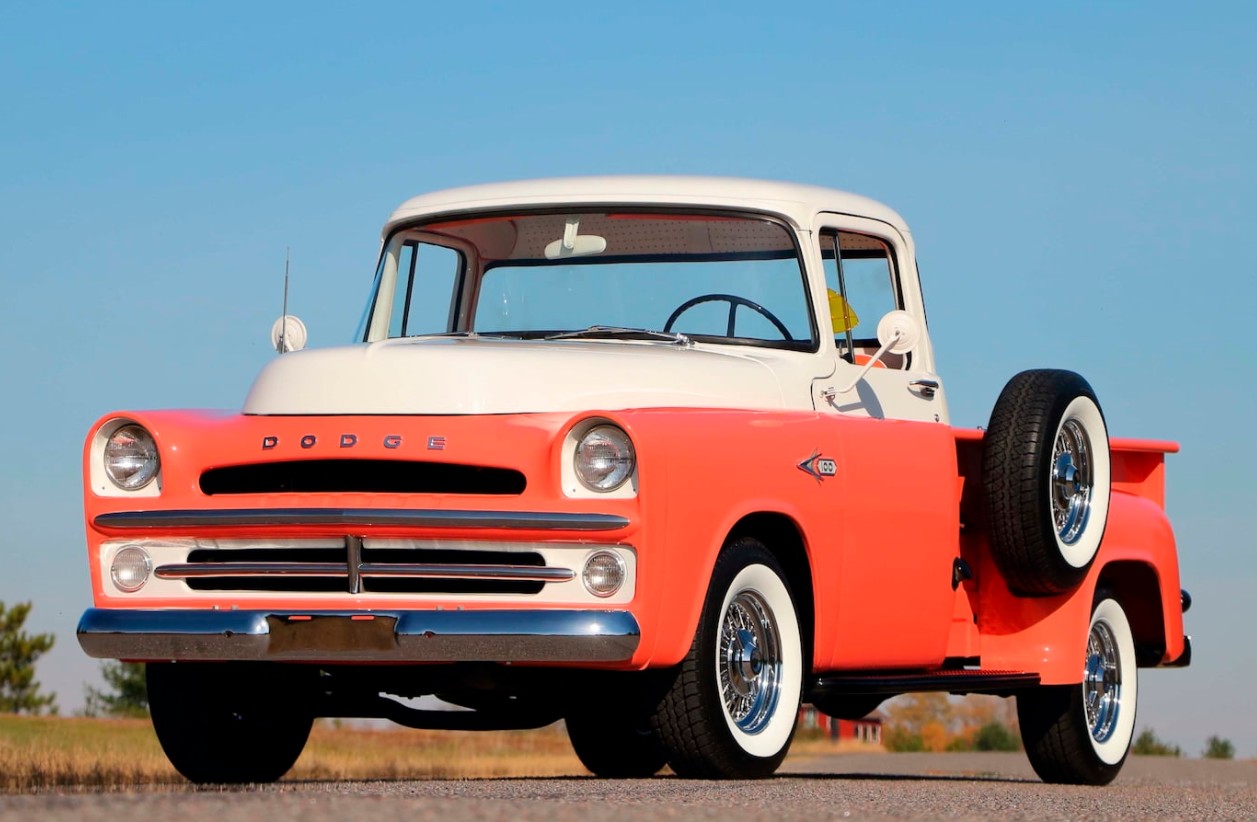 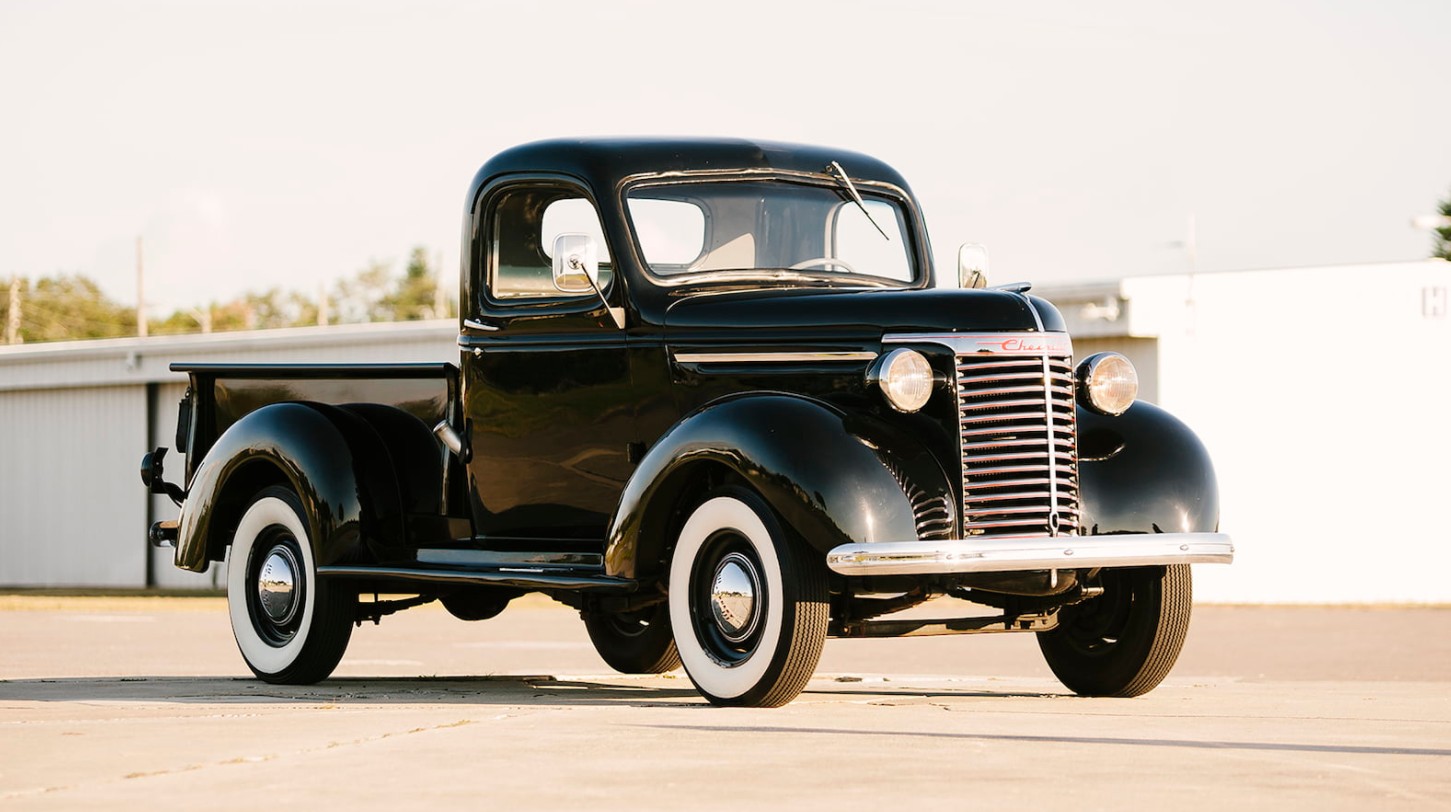 The Chevrolet Master was produced between 1933 and 1942. After the war their model names would change, but the pickup truck had been part of their lineup for some time prior to that. Their pickups from this era shared the same basic design as their passenger cars as they were all offered as part of the same model line.

This truck is powered by Chevy’s 3.4-liter straight-six, likely producing 85 horsepower. The dark green shortbed example you see here was restored about 1,500 miles ago and it has a wooden bed. Click here for more info. 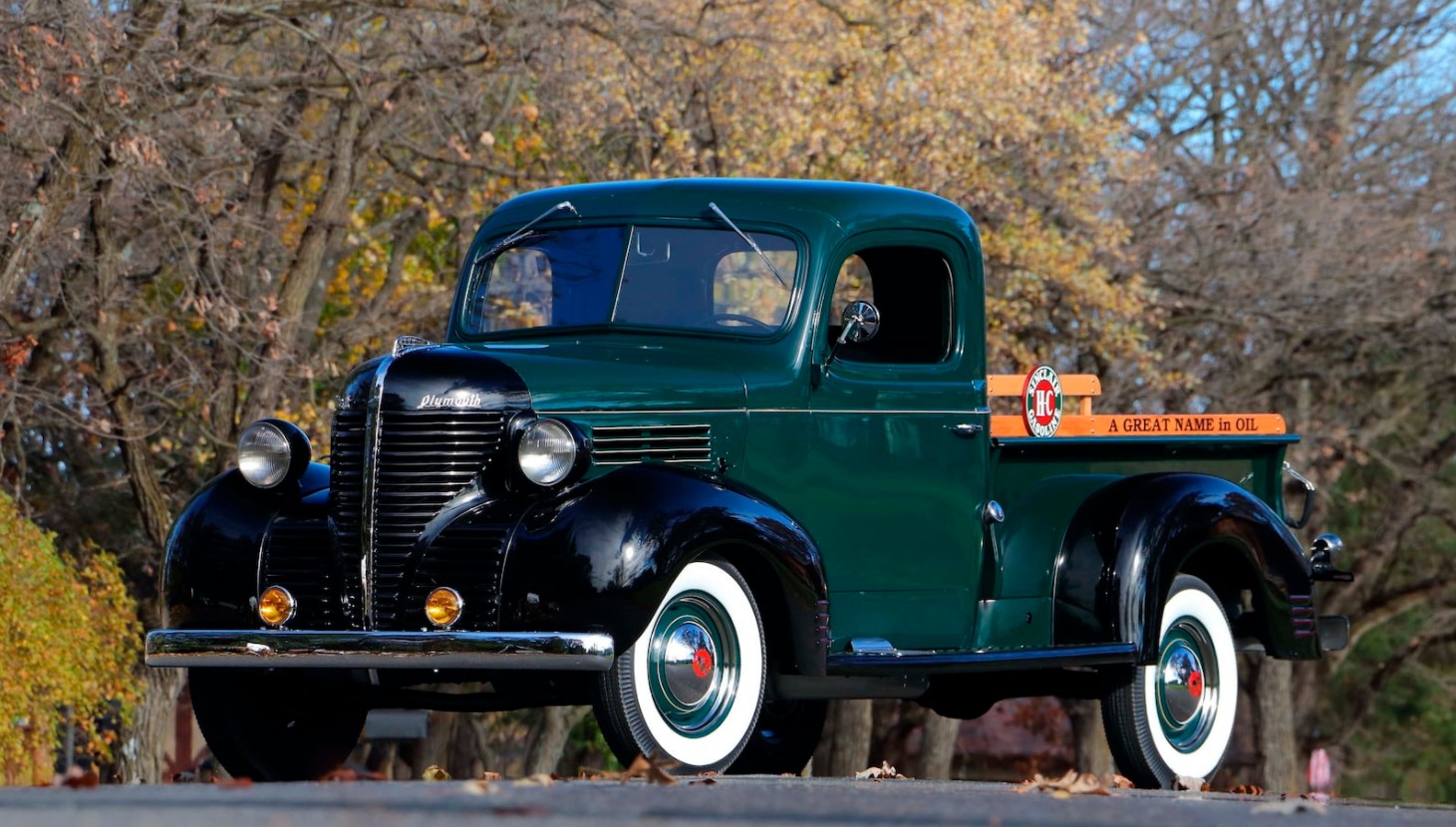 Yes, Plymouth built pickup trucks (other than the Scamp and Arrow). Before WWII started, they built some beautiful pickups. They built the Model PT line of trucks between 1937 and 1941, with the 1939 model dubbed “PT81.”

This truck is powered by a 3.3-liter straight-six. It’s well optioned and wonderfully restored. PT Plymouth pickups aren’t that easy to come by and they’re some of the prettiest trucks you can get. You can see more about this one here. 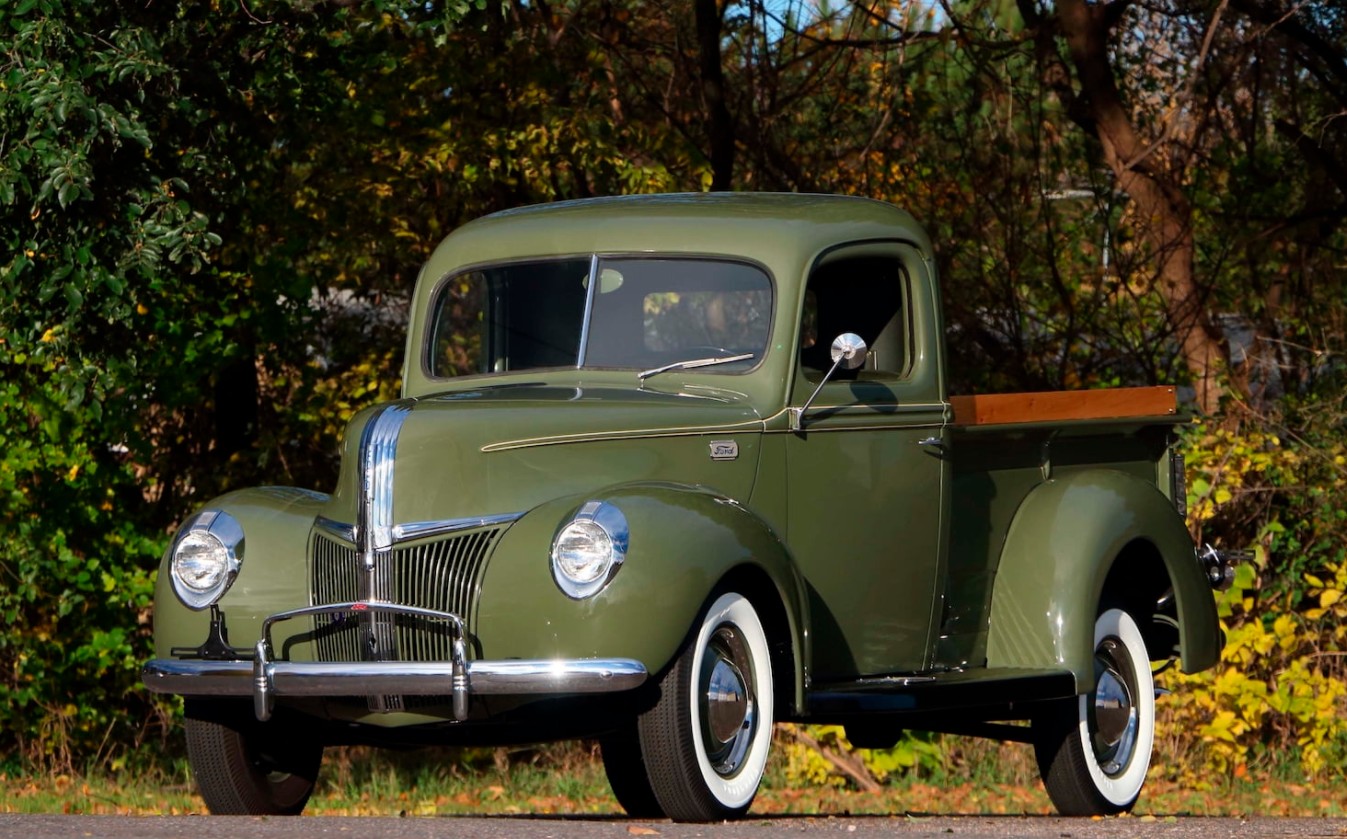 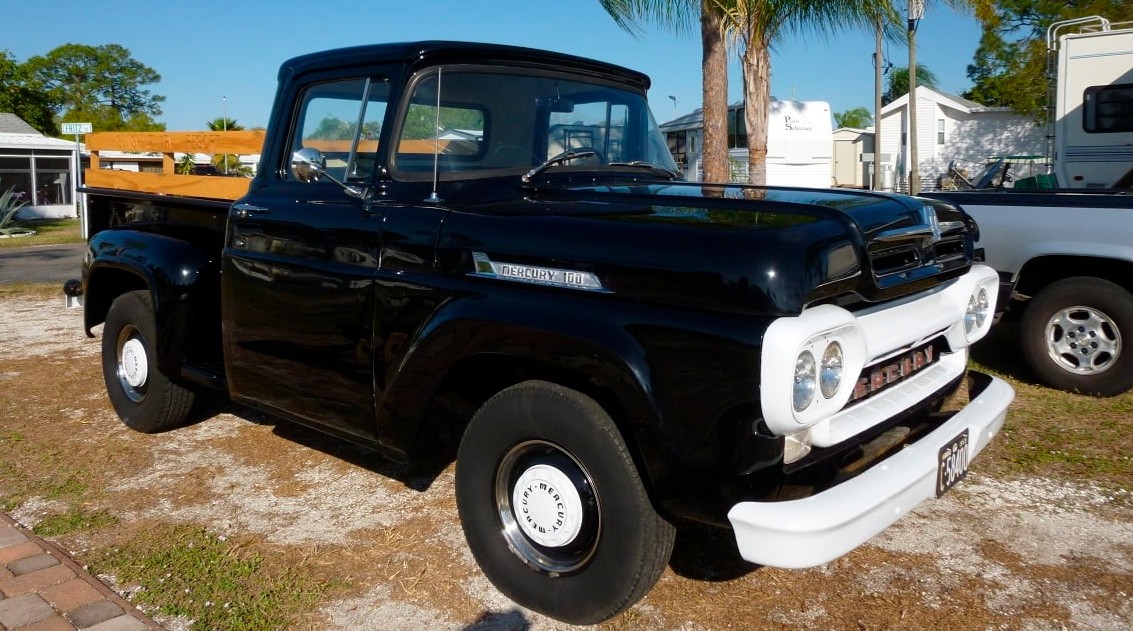 Yes, even Mercury got in on the pickup game after WWII. The Mercury M-Series was offered between 1946 and 1968. Sold primarily in Canada, these trucks more or less mirrored Ford’s American offerings with slightly different exterior styling.

This third generation truck is the Canadian equivalent of the Ford F100, meaning it’s the 1/2 ton model. Two engines were offered in 1959, a 3.7-liter straight-six or a 4.8-liter V-8, and this truck is equipped with the former. It’s a step-side pickup that presents well enough. This is an interesting truck and a rarity in the U.S. Click here for more. 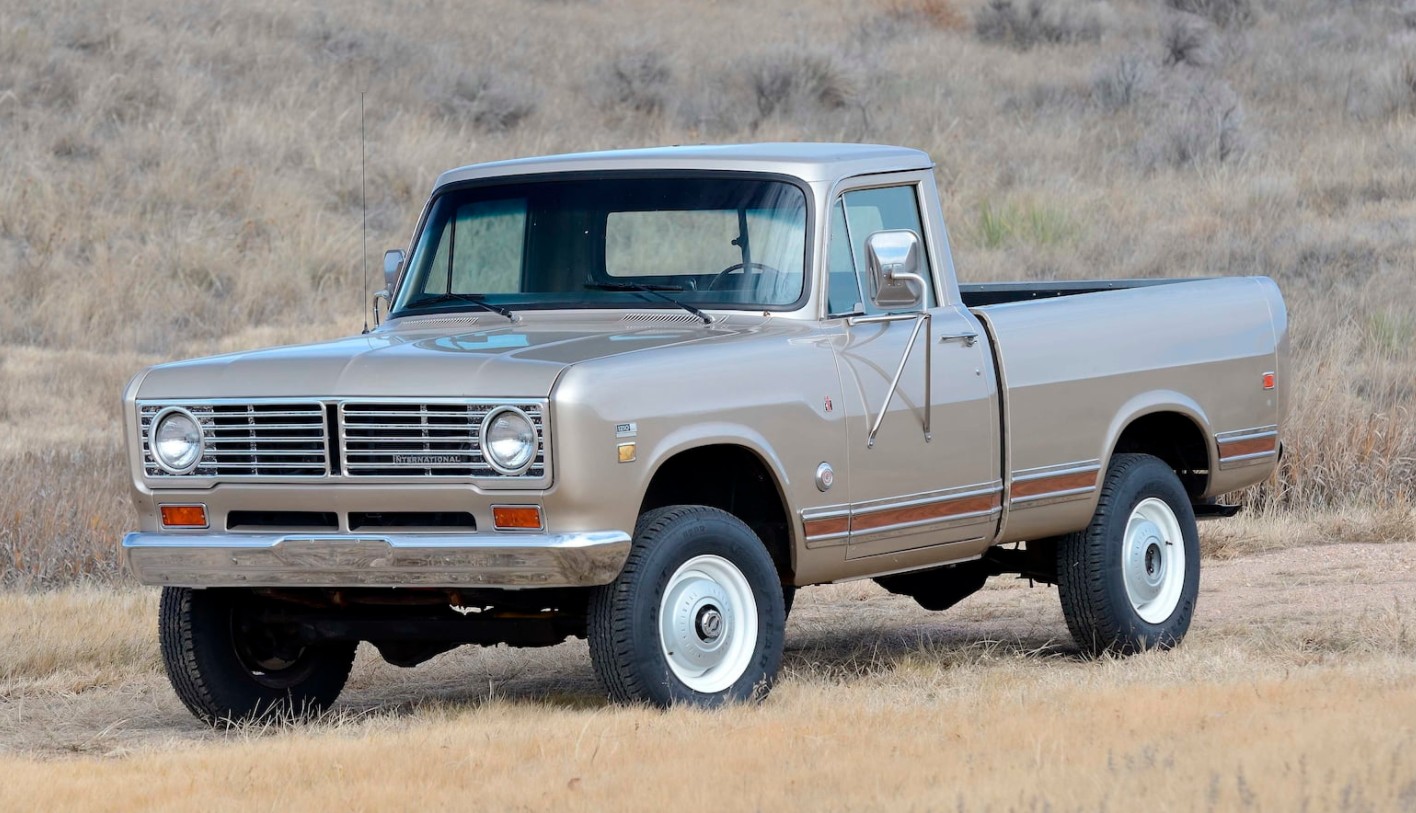 International Harvester, now a company that builds tractors and semis, used to build passenger vehicles. The final examples rolled off the line in 1980, and those were SUVs. True pickup production ended in 1975 when they built their final example of the D-Series Light Line pickup rolled off the line. These trucks were built between 1969 and 1975.

This Model 1210 was the 3/4 ton model and it’s powered by a 6.4-liter V-8. It’s got 4-wheel drive and this example appears to be a survivor. International-branded pickups don’t get the credit they deserve in collector circles as everyone wants a Ford, Chevy or Dodge. These were the workhorse trucks. IHC would be doing good business today if they had remained in the market, but instead you’ll have to settle for a time capsule like this one. Click here for more info.