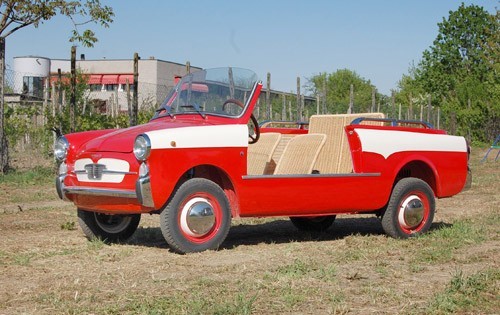 The Autobianchi Bianchina was a tiny, little car built by Autobianchi between 1957 and 1970. It was a fairly popular model and remains popular among collectors today – especially the Transformable (convertible) model. About a quarter of a million Bianchinas were built.

The cars were based around the extremely popular Fiat 500. The engine is a 499cc straight-twin making 22 horsepower. Because they share mechanicals from one of the most popular cars ever built in Europe, parts are easy to find. Fiat built “Jolly” versions of the 500 and 600 and they have become crazy expensive in the last few years. They are essentially beach cars with wicker interiors.

Well, Autobianchi tried their hand at it as well – but they only managed to build four of these Bianchina Jolly beach cars in 1963, making them extraordinarily rare – much rarer than their Fiat counterparts. This has been an Italian car all its life and should sell to a new owner for between $55,000-$62,000. Click here for more info and here for more from Coys in Monaco.