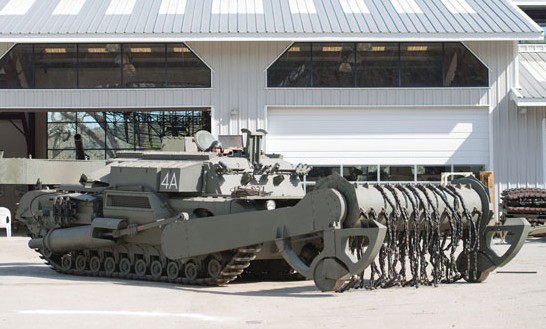 The Churchill tank was used by British forces during WWII. They were built between 1941 and 1952 and they were pretty much obsolete by the time the war ended, making them a great candidate for modification for other service. One such modification was that to a “Toad” – a minesweeper. The engine is a 21.2-liter flat-12 making 350 horsepower. The flail (that chains that pound the ground to detonate mines) has its own engine, another V-12. It will do a whopping 12 mph.

They converted 42 Churchills into Toads in the early 1950s. The one you see here has been fantastically restored and is the only one left in the world. And it is fully functional. This is one of the stars of the show. It should sell for between $400,000-$500,000. Click here for more info.